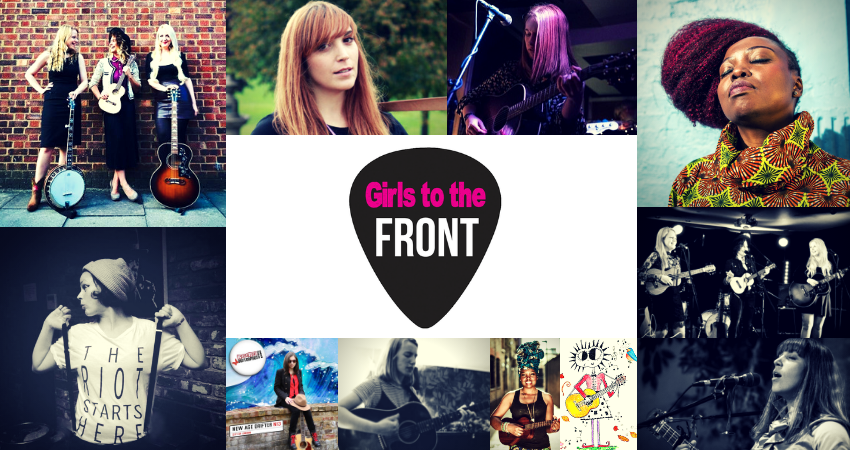 Green Note and Blue Monday present… GIRLS TO THE FRONT # 10

Green Note and Blue Monday present Girls To the Front – A night celebrating women in music by bringing the finest crop of rising female music artists to the forefront.
Back by popular demand MIRI and RoseRed bring you the tenth installment of artists who are currently making waves in the London music scene. Expect an eclectic musical feast of indie folk, delicious country roots harmonies, Yoruba acoustic soul and psychedelic magic storytelling to whet your appetite and stir your soul.

THE SAVANNAHS
Founded in early 2017, 3 singer-songwriters Emily Moment, Hannah Rose Platt and Rebecca Rosewell Formed country roots group the Savannahs. Inspired by artists such as Emmylou Harris, Gillian Welhj, Neil Young and Dolly Parton, The Savannahs lend their beautiful harmonies to a mix of both originals and rootsy covers.
“Delicious harmonies…The Savannahs are a band to keep an eye on …” Folk Radio UK

LANRE
Two years after the release of her Home EP, British singer, songwriter Lánre followed with a new EP called Human.
In the last few months since the release of her Human EP she has been commissioned to write two songs for COAT a sold out stage play at the Roundhouse by Yomi Sode and a song for the 80th Anniversary celebration of Cable Street. She was also one of the 14 artists selected by Brighter Sound for a 4-Day Residency Artist Director’s Series led by the Mercury Award Nominee Eska and Cardboard Citizens’ Artistic Director Adrian Jackson.
Lánre as well as touring Canada, France, NYC and Sweden has taken her unique sound of Acoustic Soul, Folk and captivating storytelling influenced by her Yoruba heritage, to the Royal Albert Hall, Greenbelt Festival, Edinburgh Fringe, Bath Music Festival, Folkstock Festival, Musicport Festival and the Brighton Fringe among others.
She’s currently working on a new album.

BITY BOOKER
Bity Booker is a folk singer and songwriter based in London. Her songs are mostly voice and classical guitar with a few whimsical touches such as bells, musical saw, and sparrow sounds, but the effect is mystical, mainly due to Bity’s precise, hypnotic fingerpicking style and elastic voice.
Bity grew up in the Italian countryside in a house with many animals including ‘Dodo’ the crow, ‘Freddy’ the fox, and ‘Willy’ the hedgehog. This strong connection with nature has had a peculiar influence in her songwriting. Her music brings subtle strains of the 1960s psychedelic magic and genuine and original storytelling. Be prepared to delve deep into Bity Booker’s musical world and listen to fantastic stories, each song a character with a timeless personality and melody.

“Bity Booker has a hypnotic playing style and bewitching voice that will leave you entranced.” Chandelier Room Melbourne, Australia

ROSERED AND THE BUTTERFLIES
RoseRed And The Butterflies, aka Lydia Nicolaides is a prolific singer/songwriter from north London Enfield. She pens catchy lyrics and silver tongued melodies that tell stories in a refreshing and original way. With a mixture of realism, fun, quirkiness and sadness, RoseRed’s music can move effortlessly from lightness into dark, and her style crosses a variety of genres, from Folk to Rock; from Country to Reggae. ‘Imagine Mary Poppins on acid’ playing the guitar and dancing like a pixie.