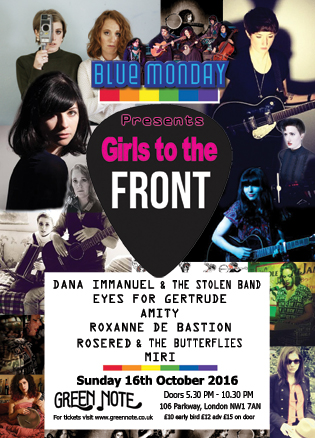 Green Note and Blue Monday present… GIRLS TO THE FRONT. A night celebrating women in music by bringing the finest crop of rising female music artists to the forefront.

Back by popular demand and after a sold out debut evening earlier this year, MIRI and RoseRed bring you a second installment of artists to showcase, who are currently making waves in the London music scene. Expect a musical feast of folk, Americana, acoustic pop and indie music to wet your appetite and fill your heart with joy!

DANA IMMANUEL & THE STOLEN BAND
Dana Immanuel is a banjo-toting, whiskey-drinking, poker-playing singer-songwriter currently operating from a north London hideout from which emerges a sound more usually associated with the bayou, triple filtered through bourbon, washboard, and a touch of alt-country eccentricity. With the five-piece, all-female Stolen Band, Dana and her all-girl Stolen Band have been getting feet stomping across the UK folk, blues, Americana and rock scenes.
Dana’s music reflects her eclectic influences, from Alice Cooper to Hank Williams, routed via the bluegrass turnpike around the township of alt-country. She is at home in the high-stakes casinos of Monte Carlo as in the basement bars of London, Paris and Amsterdam, and her live show with the Stolen Band is not to be missed. Her new album, Come With Me, recorded live-ish with the Stolen Band and released on August 5 2016, showcases the unique blues-cum-bluegrass-cum-Americana-cum-rock sound of their live sound.

EYES FOR GERTRUDE
Eyes For Gertrude are a British female duo who write full-hearted, unforgettable songs about real things. Piano pulsed, accordion tinged, guitar swooned songs are shaped around captivating observations of the everyday. Infused in their striking sound is a combination of musical influences, focusing on the balance between evocative and haunting harmonies, whilst always maintaining a skewed pop sensibility. Eyes for Gertrude present an energetic live show that is deftly entertaining, whilst at the same time, raw and authentic. The sound can switch between melancholy and humour, without seeming juxtaposed, and the pair exude a singular onstage charm.
The long awaited album Residential Bliss is out now and available from this website and itunes.

AMITY
Wolverhampton-born drummer and Brighton-brewed multi-instrumentalist AMiTY has been spreading her multi tasking style of performing since 2005.
Her unique take on being a DIY solo artist showcases her simultaneously play guitar and percussion with honest vocals and autobiographical lyrics to accompany.
From successfully touring the UK and Ireland, talk of this “one woman band” has taken AMiTY and her array of instruments to perform at festivals internationally.
Through word of mouth and no plugger AMiTY’s popular track, ‘Bedpost’ received airplay on BBC Radio Six, BBC London & Amazing Radio as well as other local BBC and commercial stations.

ROXANNE DE BASTION
Roxanne de Bastion is a Singer / Songwriter born and raised in Berlin, who grew up listening to the Beatles and learnt guitar while dreaming of writing and performing her own songs one day. Once she finished school she decided it was time to move into her own life of music and in 2007 packed a bag, her guitar and flew to London with a one-way ticket. Since then she has been playing her songs across the country and paving her own musical path, and spends most of her time on trains across the UK playing in as many different nooks and crannies as possible. Roxanne recorded her first album in April 2013 which she released on her own label ‘Nomad Songs’.

ROSERED & THE BUTTERFLIES
RoseRed And The Butterflies, aka Lydia Nicolaides is a prolific singer/songwriter from north London Enfield, with a DIY ethos. She pens catchy lyrics and silver tongued melodies that tell stories in a refreshing and original way. With a mixture of realism, fun, quirkiness and sadness, RoseRed’s music can move effortlessly from lightness into dark, and her style crosses a variety of genres, from Folk to Rock; from Country to Reggae. ‘Imagine Mary Poppins on acid’ playing the guitar and dancing like a pixie.
RoseRed released her debut album ‘Just A Glimmer’ in 2010 an album which she wrote, recorded, produced and funded herself, and which got voted and won the Fatea Magazine debut album of the year 2010 Award.
She has had two of her songs feature in two British Independent Films ‘Jesus Versus The Messiah’ and ‘Chinese Burns’. She is currently finishing the recording of her second album.

MIRI
Described as the love child of Sting and Edith Piaf, British singer-songwriter MIRI blends heart and grit, distilled through a smooth, melodic pop filter.
Three of MIRI’s songs are featured in the film “Fear Of Water” which screened at the International Women’s Film Festival in LA whilst her track “Broken City” has received radio airplay on BBC London.
MIRI regularly performs around the UK & Europe. Past live shows include 100 Club for The Official Bob Marley Birthday Celebration, Natty’s Vibes & Pressure at Passing Clouds, and supporting American folk artist Laura Veirs at Bush Hall. Her European travels have led her to perform at L Fest Del Mar in Spain, and Sofar Sounds in Amsterdam.
MIRI’s new release ‘Sound Vibrations’ is her 3rd EP, blending distinctive soft, smoky and gritty tones with thought provoking heartfelt lyrics; pop songs that speak fluent indie. ‘Electric Vibes’ has received BBC 6 Radio airplay on Tom Robinson’s Fresh On The Net mixtape show, whilst ‘The Plight’ has been making waves on the underground.

NB: Venue is part-seated, part-standing and tables are limited, so if you’d like a seat, please make sure you arrive early!