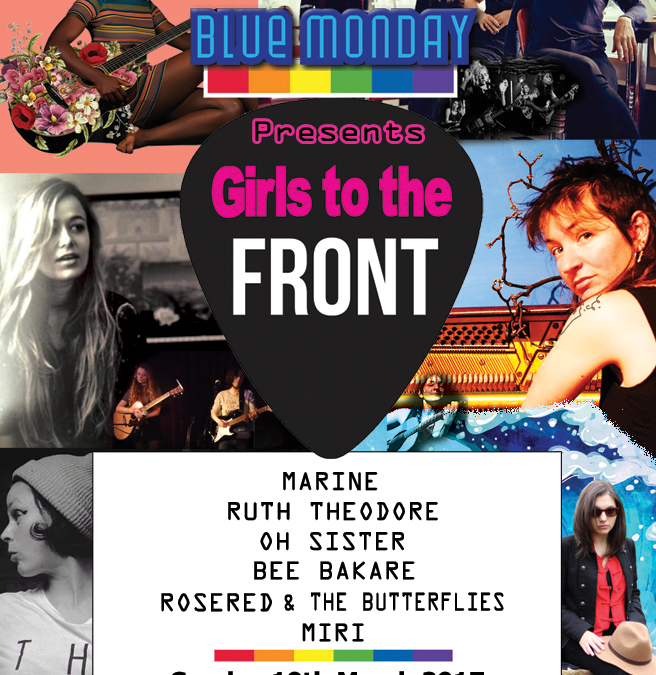 Green Note and Blue Monday present GIRLS TO THE FRONT.

A night celebrating women in music by bringing the finest crop of rising female music artists to the forefront. Back by popular demand and after two sold out evenings, MIRI and RoseRed bring you a third installment of artists who are currently making waves in the London music scene. Expect a eclectic musical feast of alternative folk, acoustic soul pop and fable electric dreamy music to whet your appetite and stir your soul.

MARINE
Marine grew in the gaps between the concrete of the city, with four very different stories they hoped to combine uniquely into just one, where all they had listened to overlapped. Intuitive beats that make you want to move, bass hypnosis in the undercurrent playfully countering melody, and with a deep love of contrast, two vocals which braid together over hooky guitar lines into a complex plait of old and new, understated and operatic, light and dark.
The songs of Marine are crystallised from mythology and fables, mingling with personal words and emotions to form tales of the ordinary and not ordinary. They describe themselves as Fable Electric. A genre all their own, made out of things we all know and things we don’t know. The Underworld, Seal Demons, mighty Kraken, Werewolves, Witches and Gods…. even questioning the very nature of storytelling itself.
When pushed for comparisons, listeners have drawn parallels with Kate Bush, PJ Harvey, Radiohead, and Warpaint. These plucky girls have been running their own show in their own way, touring Europe and the UK, quickly building a cult following in Berlin and London, flogging countless handmade CDs and artwork. Their first festival season together last summer saw dynamite shows at Secret Garden Party, Shamabala and more, spinning their singles on BBC6, and being highlighted in Major and Independent magazines and blogs along the way. Momentum is building as they swim deeper into their concept, having just proudly finished their Debut album with a producer they greatly admire; Rob Ellis (Anna Calvi, PJ Harvey, Cold Specks). They are set to release their new single, their first official video, and a string of new tour dates, this autumn. Come along to a show and witness as each girls unique character brings surprising twists and turns into the music, the conviction of the sound they make being both wild and elegant. These are four girls who play straight to your gut from the heart.

BEE BAKARE
Bee Bakare is an acoustic soul pop singer-songwriter based in London, UK. Her music is recognisable by the soulful, rich and warm contralto that features in her sound. Singing and writing from a young age, her musical influences include the likes of Lauryn Hill, Tracy Chapman and India Arie. Bee recently released the first single ‘Waiting to Happen’ from her upcoming EP (2017). The single is currently making waves as “catchy and fresh”, a consistent feature in her songs which leave live audiences saying ‘wow that voice’.

ROSERED & THE BUTTERFLIES
RoseRed And The Butterflies, aka Lydia Nicolaides is a prolific singer/songwriter from north London Enfield, with a DIY ethos. She pens catchy lyrics and silver tongued melodies that tell stories in a refreshing and original way. With a mixture of realism, fun, quirkiness and sadness, RoseRed’s music can move effortlessly from lightness into dark, and her style crosses a variety of genres, from Folk to Rock; from Country to Reggae. ‘Imagine Mary Poppins on acid’ playing the guitar and dancing like a pixie.

Three of MIRI’s songs are featured in the film “Fear Of Water” which screened at the International Women’s Film Festival in LA and will be broadcast on TV in the UK later on in the year. Her track ‘Broken City’ taken from the film has received radio airplay on BBC London.

MIRI co-promotes and co-hosts highly acclaimed monthly live music night “Blue Monday” at The Boogaloo in London; collaborating in 2016 with award winning music venue Green Note on two sold out female artist focused events called “Girls To The Front”. MIRI also put on her own event at Strongroom in Shoreditch entitled “MIRI’s Sunday Chill” which went down a storm.

Performing regularly around the UK & Europe MIRI has gained a reputation for her eclectic gigs and stage presence. Past live shows include 100 Club for The Official Bob Marley Birthday Celebration, alternative reggae artist Natty’s Vibes & Pressure at Passing Clouds, and supporting American folk artist Laura Veirs at Bush Hall. Her European travels have led her to perform at L Fest Del Mar in Spain, and Sofar Sounds in Amsterdam.

Behind the scenes MIRI works with the charity School Ground Sounds which provide additional opportunities for young people to enhance their musical education. MIRI has been a guest mentor for Wired4Music’s drop in for young people aspiring to have a career in music and is also on the FAC’s BEAT Board.