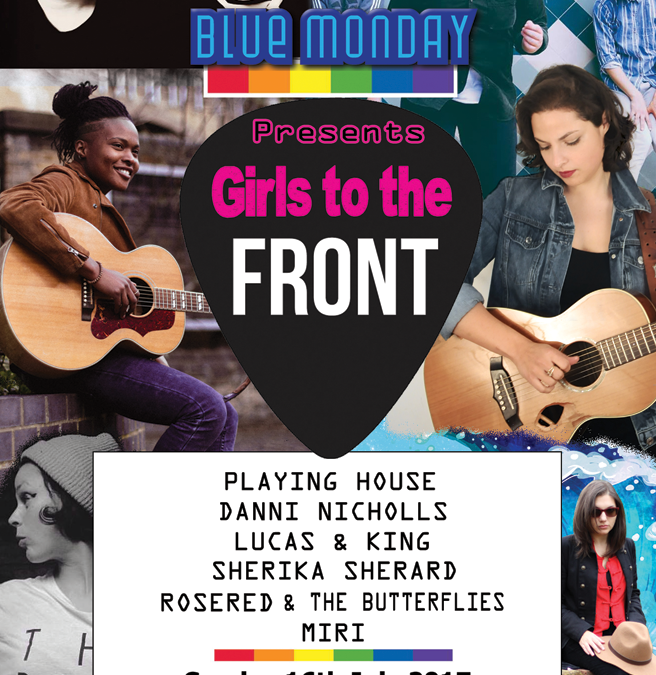 Green Note and Blue Monday present GIRLS TO THE FRONT.
A night celebrating women in music by bringing the finest crop of rising female music artists to the forefront. Back by popular demand and after three sold-out evenings, MIRI and RoseRed bring you a fourth installment of artists who are currently making waves in the London music scene. Expect a eclectic musical feast of alternative folk, acoustic soul and Frantic Art-Pop to whet your appetite and stir your soul.

Frantic Art-Pop
“A potent introduction, sonically and graphically” – The 405

“British alt-pop with twitching fragility and freneticism” – Northern Transmissions (CAN)

From a young age, Danni Nicholls was soaking up American folk, country and rock n roll music from her Grandmother’s record collection in her small home town of Bedford, UK. When she inherited her Uncle Heathcliff’s 1963 Burns London Shortscale Jazz guitar (rumoured to have belonged to Billy Fury!) aged 16, all those inﬂuences came pouring back out in the form of her own original material and has been ﬂowing ever since.

Danni met bassist/producer Chris Donohue (The Civil Wars, Elvis Costello, Robert Plant) in London in 2011 through a mutual friend whilst Chris was in the UK playing bass with Emmylou Harris as one of her Red Dirt Boys. The pair have now made two critically acclaimed albums together with some of Nashville’s ﬁnest musicians featuring on the tracks.

“My time in Music City working with these great, great musicians was a hugely inspirational and surreal experience. It forced me to raise my game and push my boundaries. I’ve come away with
two albums which I’m immensely proud of”

With performances guaranteed to melt your heart into the soles of your cowboy boots, her passionate delivery, captivating velvet voice and charmingly engaging between-song banter compel you to fall under her spell.

I absolutely love the beauty and elegance of her music – Bob Harris, BBC Radio 2! Smoky soul, folk-pop and heart-wrenching alt-country, all in a rich voice – Q Magazine! Sumptuous…a warm wry line in confessional songwriting – UNCUT! One in a million… – Maverick Music Magazine

Lucas & King write songs of simplicity and depth that pull influence from classic genres of music, from Country to 60’s Pop. They create a freshness and relevance to familiar sounds.

They champion ‘The song’ above all which you can hear in the melodic intricacies and the Honesty of the lyrics.

No frills; Unassuming, subtle and sincere.

Prepare to be challenged and positively moved as you experience the infectious creativity of Sherika Sherard. With a voice like velvet to deliver her positive outlook on life, this Singer-Songwriter never fails to warm and the hearts of Listeners.

Last year British Soul Singer Seal surprised Sherika with a visit while she was busking on the Southbank, they performed two duets and Seal went on to invite her to open for 2 of his shows on his worldwide tour. This year Sherika’s music was also chosen by Spike Lee himself to feature on his spin-off Netflix Series of “She’s Gotta Have it” to be released at the end of the year.

Sherika Sherard is a clear example of how the music industry has changed, with a strong connection to her fans and regularly performing and interacting with new ones, she has become a personality people can relate to and want to support.
Sherika says “People say I remind them of Tracy Chapman but I feel that’s mainly for obvious reasons…” She laughs, ” I’ve always loved Marvin Gaye, the way he sings while really connecting with every lyric AND reflecting on the current times in some of his songs… like Nina Simone (another influence) said, it is your duty as an Artist”

Sherika is definitely an artist to keep your eye on, known for her charming stage presence she never fails to capture her audience.

RoseRed And The Butterflies, aka Lydia Nicolaides is a prolific singer/songwriter from north London Enfield. She pens catchy lyrics and silver-tongued melodies that tell stories in a refreshing and original way. With a mixture of realism, fun, quirkiness and sadness, RoseRed’s music can move effortlessly from lightness into dark, and her style crosses a variety of genres, from Folk to Rock; from Country to Reggae. ‘Imagine Mary Poppins on acid’ playing the guitar and dancing like a pixie.