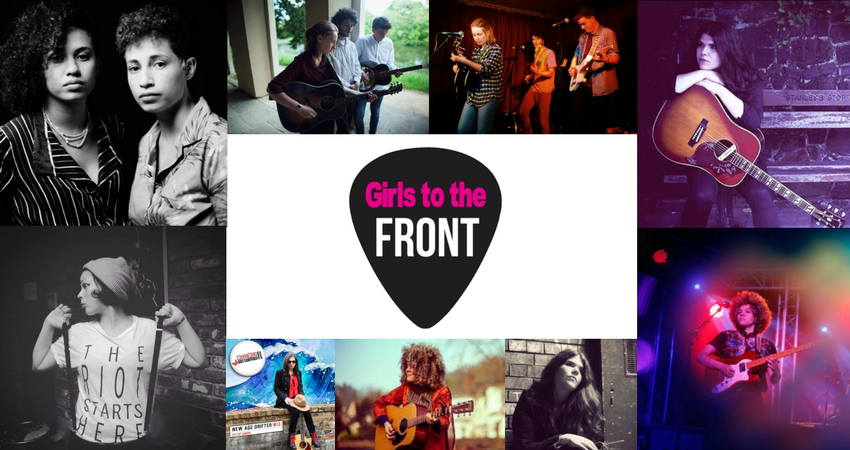 Green Note and Blue Monday present… GIRLS TO THE FRONT

MICHELE STODART
Over a decade since The Magic Numbers landed in the top ten with their double-platinum-selling debut album, Michele Stodart has taken temporary leave of the band she formed with her brother Romeo, to release her second solo album ‘Pieces’.

Released four years after her solo debut, ‘Wide-Eyed Crossing’, the nine songs that comprise ‘Pieces’ confirm that, almost by stealth, Michele has turned into an artist whose work bears strong comparison to some of the touchstone songwriters that helped shape her outlook.

“Steeped in languid melancholy… [it] sits in a rich tradition that encompasses such touchstone female performers as Karen Dalton, Jinder Sill… Allison Moorer or Gillian Welch… ‘Pieces’ may just be the most impressive record she’s ever made” – 8/10 – Uncut

XYLAROO
Sisters Coco and Holly Chant spent time moving across Asia and Europe while growing up, while the pair have deep roots in Papua New Guinea.
Currently living in East London, the pair have developed a songwriting style that, while bright and breezy on the surface, is unafraid to tackle serious subjects.
Snapped up by Sunday Best the duo are able to unveil a fresh version of ‘Sunshine’. Recorded at home, their gilded harmonies are reminiscent of First Aid Kit while the message of grabbing live and savouring every moment has rarely been so relevant.
“Life is what you make of it…”

RAEVENNAN HUSBANDES
Award-winning singer songwriter Raevennan Husbandes has collaborated with a host of the UK´s most stellar talents, from Lisa Hannigan and The Unthanks to Tracey Browne, Michele Stodart and Paul Liddell. A soon-to-be discovered gem, her fluid finger-picking guitar style and beautiful, clear and heartfelt singing voice can electrify a room. She has recently released her debut EP ´Box of Innocence´ produced by and featuring the legendary BJ Cole on pedal steel guitar.

“Raevennan is blessed with a voice that silences rooms and captivates audiences. It is sweet and pure and drifts beautifully over the intricate and dexterous guitaring she plays underneath” – Alphabetbands

Up-and-coming Americana Band originally from Bath. With essences of Dylan, Eagles and The Bros Landreth, the group has an organic and dynamic live show of heart felt, home grown songs that will capture your imagination, and leave a craving for a small whiskey…

“Just gorgeous country-infused music. I want to be the forth member!” – Dermot O’Leary, BBC Radio 2

MIRI
Described as the love child of Sting and Edith Piaf, British singer-songwriter MIRI blends heart and grit, distilled through a smooth, melodic pop filter.MIRI’s latest release Sound Vibrations is her third EP, blending distinctive soft, smoky and gritty tones with thought provoking heartfelt lyrics; pop songs that speak fluent indie. ‘Electric Vibes’ has received BBC 6 Radio airplay with Tom Robinson and on Radio DIVA with Heather Peace & Rosie Wilby whilst ‘The Plight’ was played by John Kennedy on Radio X.Three of MIRI’s songs are featured in the film “Fear Of Water” which screened at the International Women’s Film Festival in LA and has been broadcast on TV in the UK. Her track ‘Broken City’ taken from the film received radio airplay on BBC London.

Performing regularly around the UK & Europe MIRI has gained a reputation for her eclectic gigs and stage presence. Past live shows include 100 Club for The Official Bob Marley Birthday Celebration, Safe Gigs For Women at The Tooting Tram & Social, Bush Hall supporting Laura Veirs and upstairs at Ronnie Scott’s. Her European travels have led her to perform at L Fest Del Mar in Spain, Sofar Sounds in Amsterdam as well as Berlin, Ireland and Bergen. Behind the scenes, MIRI works with the charity School Ground Sounds which provide additional opportunities for young people to enhance their musical education. She has been a guest mentor for Wired4Music’s drop in for young people aspiring to have a career in music and is on the FAC’s (Featured Artist Coalition) BEAT Board.