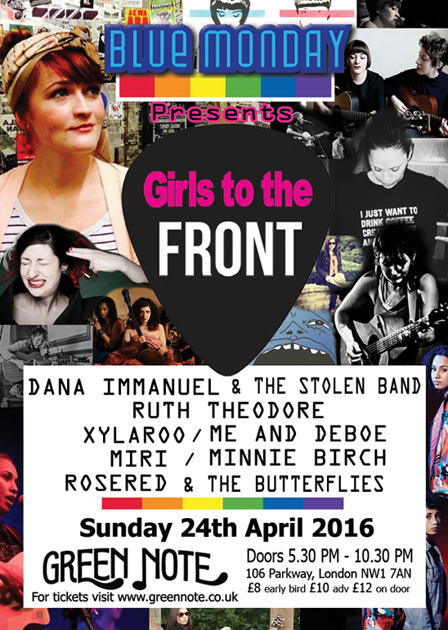 Green Note and Blue Monday present… GIRLS TO THE FRONT.
A night celebrating women in music by bringing the finest crop of rising female music artists to the forefront.

Join MIRI and RoseRed for an enchanting early evening showcase featuring an eclectic mix of outstanding acts who are currently making waves on the London music scene! Expect a mixture of folk, Americana, flamenco blues rock and indie music.

DANA IMMANUEL & THE STOLEN BAND:
Dana Immanuel is a banjo-toting, whiskey-drinking, poker-playing singer-songwriter currently operating from a north London hideout from which emerges a sound more usually associated with the bayou, triple filtered through bourbon, washboard, and a touch of alt-country eccentricity. With her all-girl ensemble, The Stolen Band, Dana has been getting feet stomping across the UK folk, blues, Americana and rock scenes.

RUTH THEODORE:
“Songs so quirky and unexpected that it’s impossible to imagine anyone else performing them, following none of the more conventional styles of song-writing. And it actually works.” – The Guardian ★★★★
“Breathless vocals, angular, cryptic, and engaging. Beneath the self-conscious eccentricity there’s a serious musician.” – The Observer on Sunday

ME AND DEBOE:
“vibrant, raw, powerful, with a feminine twist”
There are no tricks here [with] the duo’s driving riffs and sumptuous vocal harmonies effortlessly intertwined to devastating effect..” Tom Robinson, BBC 6 Music, Fresh on the Net.

XYLAROO:
Xylaroo is the joint musing of sisters Coco & Holly Chant, and the music reflects a cross-section of cultural influences – growing out of their time living in Asia and Europe, original Papua New Guinean roots, and brand new haunts in East London.
Xylaroo have recently signed to Sunday Best Recordings

MINNIE BIRCH:
Minnie Birch is a Hertfordshire-based songstress who’s already conquered a sell-out crowd when performing a support slot for Joan Armatrading. Minnie really is a significantly fresh talent with a style and delivery that’s all her own and really sounds like no-one else. Minnie makes sad and dreary music that will leave you feeling happy.

ROSERED & THE BUTTERFLIES:
RoseRed And The Butterflies, aka Lydia Nicolaides is a prolific singer/songwriter from north London Enfield, with a DIY ethos. She pens catchy lyrics and silver tongued melodies that tell stories in a refreshing and original way. With a mixture of realism, fun, quirkiness and sadness, RoseRed’s music can move effortlessly from lightness into dark, and her style crosses a variety of genres, from Folk to Rock; from Country to Reggae.
“RoseRed is infectious, huggable and loveable but above all, she is a supreme musical talent oozing originality and a certain quality and honesty with the way she delivers her songs.” David Durant. Head of Live & Unsigned Music, Brooklands Radio

MIRI:
“If Edith Piaf and Sting had a love child it would be MIRI” – Anthony Haden-West (Filmmaker)
MIRI began a career in music after leaving school and making a short film featuring two of her songs and gaining interest from a music publishing company. She grew up listening to an eclectic range of music which has contributed to her soulful pop sound that blends silky soft and gritty vocals with thought provoking lyrics. Pop songs that speak indie. Three of MIRI’s songs feature in the British Film ‘Fear Of Water’ which screened at the International Women’s Film Festival in LA whilst her track Broken City has received radio airplay on BBC London.