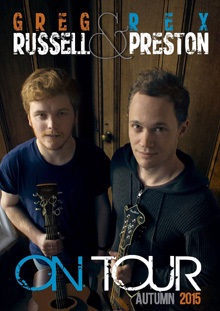 Despite a shared love of folk music both Greg Russell and Rex Preston approach it from very different angles. Greg – a powerful vocalist and guitarist – has spent much of his musical life in folk clubs and listening to traditional music, while Rex – a flamboyant mandolinist – arrived to the folk scene much later having toured with numerous bands of varying genres. The result is a delightful mix of two contrasting ways of looking at the same songs and tunes: giving traditional songs a contemporary edge and vice versa. The pair, both still touring extensively with existing duos (Rex with Miranda Sykes and Greg with Ciaran Algar) are looking forward to taking their new partnership on the road.