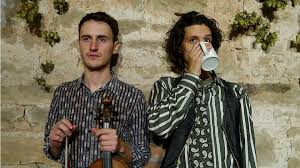 **** “Bursting with invention and full of surprises.” – The Telegraph

After releasing their debut debut album The Girl I Left Behind Me in 2015 they began extensively supporting and accompanying Midge Ure throughout Europe. They performed live sessions on BBC Radio 2, 6 Music, as well as playing the likes of Glastonbury Festival and Cambridge Folk Festival.

In 2017 they’ll embark on their first tours of Australia, New Zealand, Scandinavia and Ireland to coincide with the release of their latest recordings.

“A haunting collection of atmosphere, textures and layers, malleable approaches and subtly which makes a mockery of genre or any attempt to pigeonhole.” – Spiral Earth