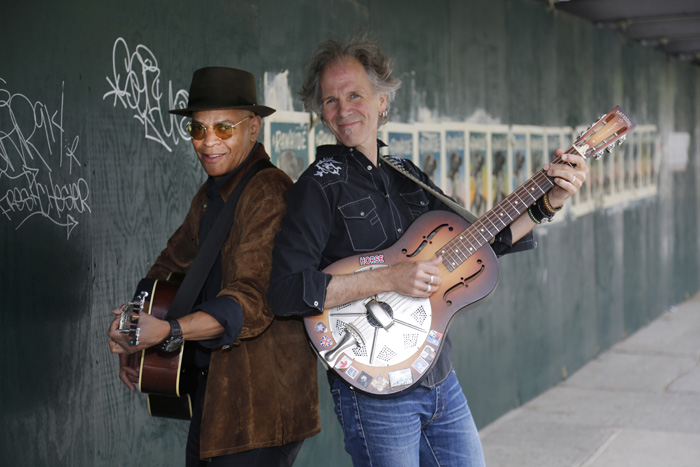 Debut double header UK tour ‘Inside the Delta’ features two of the world’s best guitarists of all time, New York blues legend Guy Davis and Americana / Blues singer-songwriter Brooks Williams, now based in the UK but originally from Statesboro, Georgia.

Guy’s parallel careers– as a musician, an author, a music teacher and a film, television and Broadway actor mark him out as a Renaissance man, yet the blues remain his first and greatest love. Growing up in a family of artists (his parents were Ruby Dee and Ossie Davis), he fell under the spell of Blind Willie McTell and Fats Waller at an early age. When Guy plays the blues, he doesn’t want you to notice how much art is involved. Kokomo Kidd, his latest album finds the blues ambassador visiting fresh territory, his deft acoustic playing and well crafted lyrics are present as always but perhaps offers more light and shade.

Brooks is a man on a mission. He not only tours like a hellhound’s on his trail, but creates a super-charged music that is electrifying and fighting-fit. His influences fly so fast and furious they blur, yet his sound… well, no one does it like Brooks! He stands on tradition but he doesn’t stand still. He brings together electric, acoustic, slide guitar, singing and songs in a way that is blues to its core but also dips a little deeper into the well.
In 2013 he was nominated ‘best male vocalist’ by the UK’s foremost roots-music website, Spiral Earth. Americana UK says, “he has a beautiful voice that you just melt into”. And he’s one helluva good guitar player, ranked in the “Top 100 Acoustic Guitarists.” The San Antonio Light says that Williams is a “fret monster who has to be seen to be believed!”. His slide guitar playing is legendary, with echoes of Mississippi Fred McDowell, Bonnie Raitt and J.J. Cale, it just doesn’t get any better.
Walking the line between blues and Americana, Brooks Williams has worked stages worldwide for over 25 years, amassing a staggering back-catalogue of songs, recordings and tales. With nearly 23 CDs to his name, fRoots says Williams’ music is “Americana at its finest!”.

“Brooks is a lovely player, a lovely singer and a great writer. The real thing.” – Martin Simpson