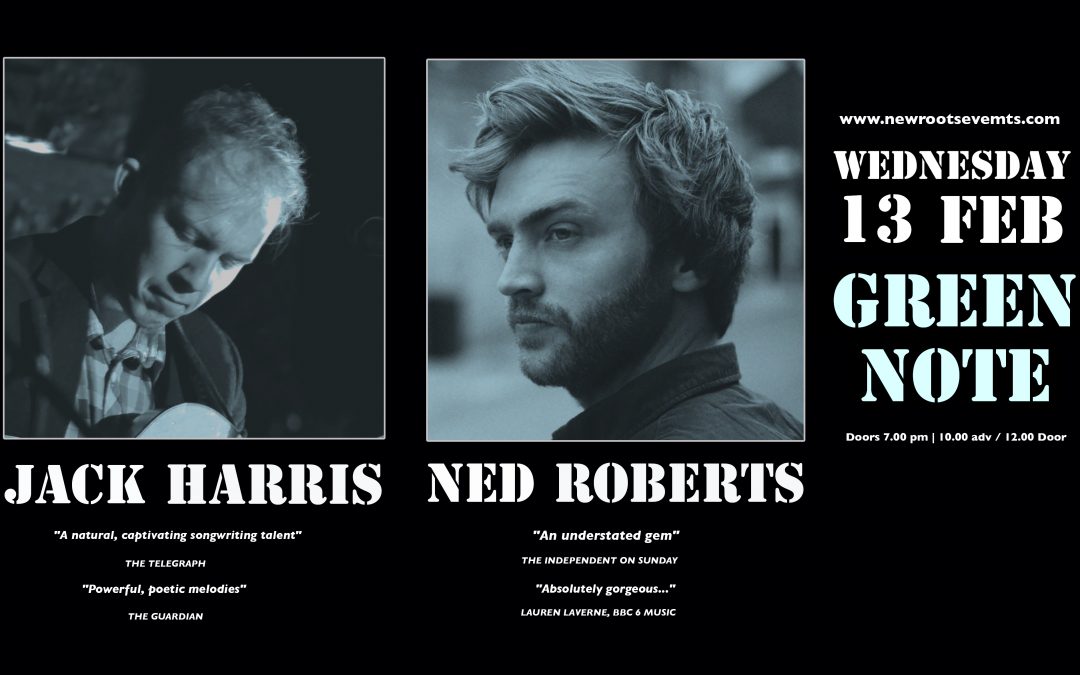 ** Due to unforeseen circumstances, Robin Elliott, who was originally booked is no longer able to play on this date. So Jack Harris & Ned Roberts have kindly stepped in instead. If you had tickets to see Robin they will still be valid for this show. Alternatively, you will be contacted by Ticketweb offering a refund **
JACK HARRIS‘s songs take a compassionate look at things both common and uncommon, and see them differently. They are literate, curious, often in character, and always intriguing. His latest album, ‘The Wide Afternoon’, produced by UK folk giant Gerry Diver (Sam Lee, Lisa Knapp, Tom Robinson), was released in November 2016 to universal press acclaim. Jack was a SXSW showcasing artist at 17, and the youngest ever winner of the Kerrville Folk Festival’s New Folk Award in 2005 (previous winners include Gillian Welch, Devon Sproule and Anais Mitchell). He has been the recipient of the PRS ATOM award for new music creation, as well as an EFDSS creative bursary for songwriting.
‘Jack Harris is a priest of song who holds himself to a rigorous, ancient code of beauty most of us have forgotten exists.’ Anaïs Mitchell
‘A lyricist of great descriptive precision and a flair for revealing observation’ – Folk Radio UK
‘A unique lyrical mind’ – Q Magazine
‘A natural and captivating song writing talent, 5/5’ – The Telegraph
NED ROBERTS is an acoustic singer-songwriter based in London. Not long after writing his first songs, he was discovered by producer Luther Russell (Sarabeth Tucek, Richmond Fontaine, Noah & The Whale) and brought to Los Angeles to record. The pair have since developed a close creative partnership.
The first single culled from these sessions was “Red Sun”, which featured frequently on BBC 6 Music, BBC Radio 2, BBC Radio Scotland, and Radio 3 in Spain. On the heels of this came the single “Blues #6”, featuring vocals by acclaimed songstress Sarabeth Tucek. The track was championed by Lauren Laverne, Jo Whiley, Gideon Coe, and Huey Morgan on BBC Radio. His debut self-titled album was released to great acclaim in 2014, garnering significant national press, notably from the Guardian and Uncut magazine. Live sessions for BBC Radio London and Bob Harris’ Radio 2 show soon followed.
No stranger to the road, Ned has toured the UK extensively. He attained a much sought after support tour with celebrated US songwriter Anais Mitchell, and has also supported the likes of Joe Pug, Micah P. Hinson, The Delines and Sarabeth Tucek. He has also toured the West Coast of the US, embarked on a 14-date tour of Germany, as well as gigs in France, Spain and Italy.
‘Absolutely gorgeous stuff…one to really get excited about’ – Lauren Laverne, BBC 6Music
‘A warm treat…his melodies reminiscent of Leonard Cohen with lyrical nods to Bob Dylan, and his voice has echoes of Tim Hardin‘ ★★★★ The Guardian
‘A splendid debut…a beautiful record’ – Gideon Coe, BBC 6Music
‘so gifted, possessing a fine ear for a tune and a real knack for storytelling..stunning’. 8/10 – UNCUT
‘An understated gem’ – The Independent on Sunday
‘A beautiful voice that brings faded emotions back to the surface. I’m a sucker for a good storyteller.’ – Jody Stephens, Big Star/Golden Smog
‘A lovely lilting voice that recalls a trans-Atlantic Nick Drake… requires replaying constantly’ – Rough Trade
‘Absolutely fantastic, softly spoken and considered’ – Roddy Hart, BBC Radio Scotland

_____________________
New Roots is committed to promoting events that shine a light on up and coming talent in the UK alt-folk scene. It’s committed to providing artists with an environment that is sympathetic to what they do, giving musicians the respect they and their music deserves – for this reason we ask for no talking and no use of mobile phones while artists are performing. Our music policy comes from the kitchen table, the roots of public performance- intimate, acoustic based, high quality musicianship with as little interference between performer and listener as possible.
Website: www.newrootsevents.com
New Roots Radio: https://www.mixcloud.com/RadioNewRoots/