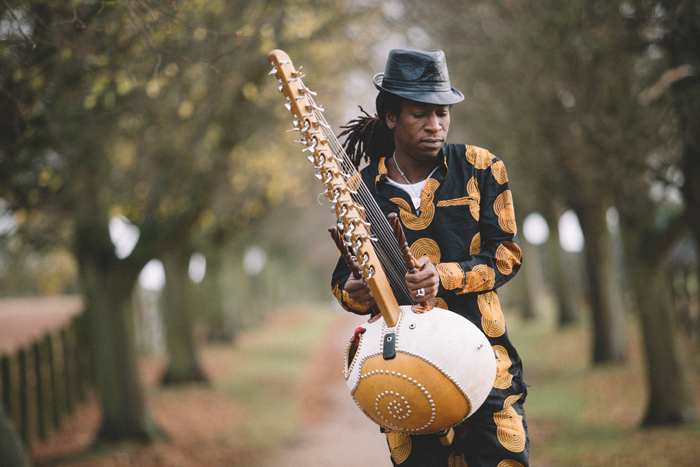 If there is one name to look out for in 2017 in African funk music it is Jally Kebba Susso and his band Manding Sabu.

The kora is the traditional harp of the griot of West Africa and Jally Kebba was born and raised into 74 generations of this Gambian musical heritage. But he is not your ordinary griot.

Forging a new trajectory of sound for the West African harp, Jally Kebba skilfully blends the traditional repertoire into his own heady jazz concoction that is immediately accessible and uplifting and yet filled with nuances and intoxicating rhythmical layers that give the music depth and intrigue.
Raised in a household of musicians, Jally Kebba was exposed to incredible musicianship from a very early age and under the guidance of his father Bully Suso, a very well-respected kora player and his elder brothers by 13 he was touring internationally across Europe.

He honed his own sound over years of experimentation on the London underground scene since 2002 when he relocated to UK. In 2007 he formed his band Manding Sabu and has since released two albums of original compositions – Banjul-London (2017) and Malaye Warr (2012) and gigged extensively.

Expect an electric stage show. With ease and confidence, this band connects. Precision, speed and a merciless energy characterise their performance style making them solid crowd-pullers at festivals such as Wilderness, Shambala and Secret Garden Party.

Jally Kebba will be joined by the talented Matteo Grassi and Yuval Juba Wetzler on bass & drums. The repertoire of the show will be taken from the new album Banjul- London, recorded in both his homeland of Gambia and home of choice, London. Songs are sung in Mandika and are songs of praise and love and are a timely call for togetherness and solidarity, palpable to all language speakers.

If you enjoy afrobeat and funk, and need a good dance session, you’ll find yourself in good company – to experience the kora as you’ve never seen it before.