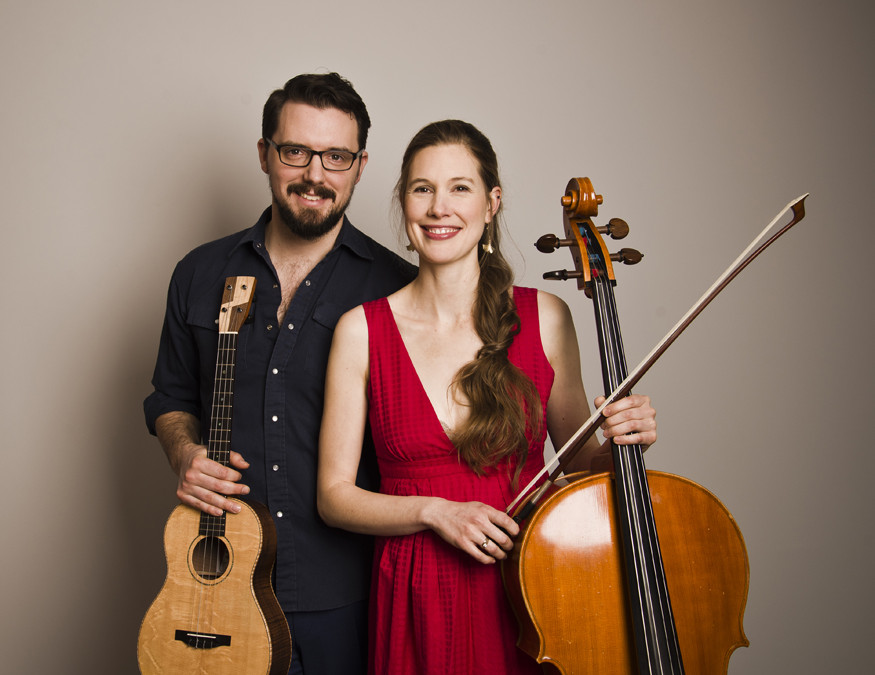 It’s true: opposites attract. JAMES HILL, “possibly the best ukulele player in the world” (Waikato Times), grew up playing folk, jazz and blues on his ukulele. ANNE JANELLE, “a cellist of true beauty” (Ottawa Citizen), played only classical music on her cello. But the pair’s differences became their greatest asset: the uke is high, the cello is low; the uke plays short notes, the cello long bow strokes; the uke is all about strumming while the cello radiates melody.

In 2009, James and Anne released True Love Don’t Weep, an album of duets that garnered a Canadian Folk Music Award for Traditional Album of the Year. A mixture of traditional tunes with “fresh vitality” (Country Music People) and original songs, True Love Don’t Weep showcased the duo’s ability “to capture the soul of a song” (Folk World).

Since True Love Don’t Weep, James and Anne have released two solo albums each (James’ Man with a Love Song and The Old Silo; Anne’s Beauty Remains and So Long at the Fair) and toured in over 15 countries, making their mark not only as accomplished instrumentalists but also as some of the finest songwriters of their generation. Together, they conjure a sound that is intricate, enchanting and engaging: “a crystal clear sound filled with warmth” (Bob Mersereau, CBC Radio). In concert, James is “a dazzling live performer with a genial, low-key sense of humour” (Edmonton Journal) and Anne brings her “gorgeous syrupy voice” (Acoustic Magazine) to songs that are “inventive, entertaining, beautifully written and brilliantly performed” (R2 Magazine).

In short, a night out with James Hill & Anne Janelle is “the perfect evening of tunes, stories and musical virtuosity” (Wellington Dominion-Post).

Jools Holland says: “She has a fantastic voice – her band makes me want to dance… they have that magical element which it’s almost impossible to put your finger on!” With her ebullient blend of vintage ukulele jazz and blues-infused Retro-Pop Swing originals, Sara’s music breaks boundaries. She has been played on BBC Radio 2 and has even converted a younger audience via Bestival director DJ Rob da Bank. The band has a residency at London’s darkest smokey-jazz dive, Boisdale of Belgravia, and has toured the UK & Germany, where she has a surprise following of fanatical fans. Setting her own songs next to Charlestones like “Five Foot Two, Eyes of Blue”, jazz versions of “It Must Be Love” and heart-melting ballads like “Secret Love”, Sara Spade delivers a cracking performance. Just check out the live videos on her website. To quote BBC Radio London’s Larry Pryce, Sara is “Simply irresistible…a special one-off talent.”