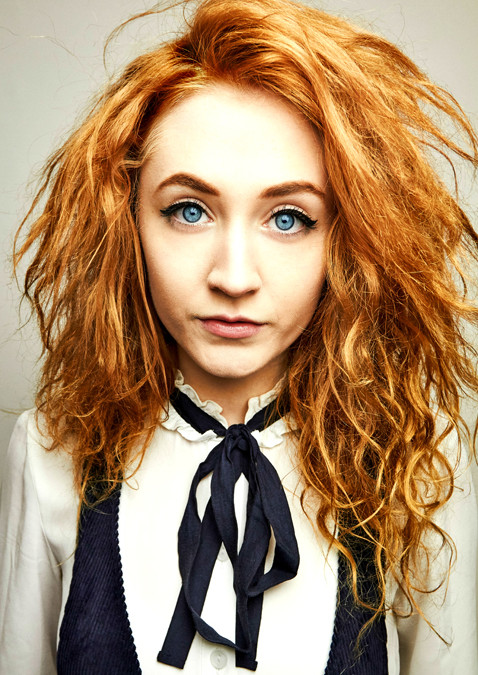 JANET DEVLIN: Northern Irish singer-songwriter Janet Devlin grew up outside the village of Gortin in County Tyrone, the only girl and youngest of four in her family. She thrived on a diet of watching Kerrang! TV and taking regular bus rides to local record stores in nearby Omagh. Fuelled by a love of bands like Foo Fighters and Red Hot Chili Peppers and inspired by their songwriting, hidden away in her parents’ shed she taught herself to play instruments by ear and penned her own songs where nobody else could hear her sing. “I’ve been writing for as long as I can remember, as long as my mum remembers,” Janet says. “My gran recalls me writing songs when I was five. If there was a musical instrument around I would want to play it, but I am ‘sound shy’ so I’d go to the shed where there was a big pool table as I didn’t want my parents to hear what I was doing.”

Desperate to learn to play the drums, when her parents refused her the money to buy her own kit she resolutely entered local singing competitions to win cash prizes and pay for her drums with the proceeds. Her musicality and determination flourished and as a consequence, the songs she posted to her YouTube channel gained an unexpected but welcome fan base who were ready to support her in the next stage of her music career. In 2011, she caught the public’s attention on Series 8 of The X Factor, where she consistently received the highest consecutive public vote out of all the contestants.

Janet’s a big fan of cartoons (she’s obsessed with ‘Adventure Time’), gaming, Netflix, poetry and horse riding. Her quirky yet shy nature has won her a huge online following of fans that call themselves… The Devlinators, what else!

Janet’s debut album Running With Scissors was released in June last year reaching number one on the UK Indie Breakers chart. This 10-track debut is full of folk-driven pop songs and heart-touching ballads, which perfectly showcase her unique and enchanting vocals. The tracks are mostly authored by Janet and were recorded up in a staggering 6 weeks; but hidden around the corner you’ll find featured co-writes with Newton Faulkner (“Creatures Of The Night” and “Hide And Seek”) and Jack Savoretti (“Delicate”) nestled alongside a surprising and sensitive cover of The Cure’s “Friday I’m In Love”. Janet’s other influences include Imogen Heap, Turin Brakes, Adele, Mumford & Sons, Avril Lavigne, Regina Spektor and Florence & The Machine. As a result the album is full of rolling percussion, lush harmonies, string sections and acoustic guitars. There’s even a hint of Jack Johnson thrown in there on the track “Lifeboat”. Running With Scissors is a soulful, passionate album about growing up, becoming independent and dealing with a whole new range of emotions.

The album was released in North America on 10 February 2015. This successful launch across the pond has led to Janet leap-frogging the Atlantic several times already this year. She recently toured her album across the East Coast, building on her already strong US fan base, and has plans to return before the year is out. Always keen to engage with her followers across the world, Janet’s been regularly performing using the online platform ‘Stage it’. This live music streaming network means viewers get a front row seat to her shows – she’ll often the take to the stage well after midnight in the UK to make sure she performs across as many time zones as possible.

To keep the hungry Devlinators fed and answering the call to so many requests, Janet slipped back into the studio to record a covers EP entitled ‘Duvet Daze’. It’s a small collection of some of her favourite artists and songs including tracks by 10cc and Ed Sheeran. Since then, she’s been back in the studio again recording more music and this November will see the release of a festive brother  to ‘Duvet Daze’. The new EP ‘December Daze’ is an assortment of original songs and a couple of seasonal chestnuts thrown in to the merry mix. One of the tracks, ‘Happy Holidays’, involves Janet playing drums, percussion, ukulele, glockenspiel and has a guest appearance from a choir made up of her merchandise warehouse team! December Daze is set for release on November 27th.

Now at the tender age of twenty, Janet is busy writing for album number two and broadening her repertoire. Placing a strong emphasis on the emotion associated with each song, her maturity is speaking volumes on her latest material. With a rapidly expanding songbook Janet aims to be back in the studio in the New Year to start recording her new masterpiece ‘Holy Water’. Exciting times ahead!