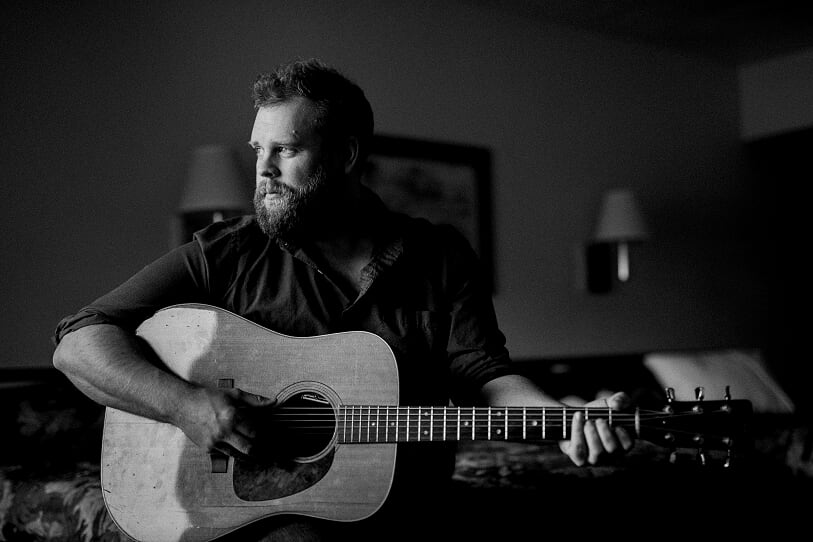 Although he was an accomplished and fully engaged English teacher, for JEFFREY MARTIN music (and the tour life) was a constant raccoon scratching at the back door. He spent nights on end sitting up in bed, and then sitting on the front porch, staring off into the dark, wondering if he could bear to leave teaching to go on tour full time. Eventually his brain caught up with what his guts had known for months. With tears in his eyes he announced to his students that he wouldn’t be back the following year, and that he didn’t feel right hollering at them to chase their dreams at all cost if he wasn’t going to do the same. Jeffrey Martin tours full time now. He is always making music, and he is always coming through your town. He misses teaching like you might miss a good old friend who you know you’ll meet again. Jeffrey has put out bunches of music since 2009, but he’s most proud of the more recent stuff. He’s fortunate to be a part of the great and loving family that is Fluff and Gravy Records in Portland, OR.

“One Go Around,” from the autumn of 2017, is his 3rd full length album. He currently lives in Portland, Oregon but feels lately that it has become a secret that someone figured out how to monetize. And since he has no money of any kind, everything beautiful about the city is marred by the quiet ticking of a countdown toward the day that he’ll have to find somewhere to live that doesn’t require a steady bleeding fortune.

“He’s an incredibly rare find among today’s glut of singer-songwriters: a songwriter whose songs are immediately affecting. These are the kind of songs that can change you.”- Devon Leger, No Depression

An internationally touring artist with a deep love of quiet stories, Anna is beginning to carve a place for herself in the songwriting world. She was a winner at last year’s Kerrville Songwriting Contest, and has shared the stage with heroes and friends like Gregory Alan Isakov, Shook Twins, Anais Mitchell, Jefferson Hamer, Peter Mulvey, Matt the Electrician, Devon Sproule, Darlingside, Steve Poltz, Jeffrey Martin and more.

Her newest album, Small Believer is her best work to date, a series of quietly dazzling vignettes in which she digs deep into the ordinary and finds special people lurking.

“Everything here is testament to her storytelling gifts (she’s been likened to Steinbeck and I suspect she may have a novel or short stories collection in her) with her finely drawn characters and observations of an emotional life that ranges from defiance to regret, joy to sadness.”- Folk Radio

“Anna Tivel’s voice is haunting, exhibiting the timbre of a precocious child, whispering to a teddy bear underneath the covers.” – The Bluegrass Situation

“To be sure, these are organic songs that freely reveal the poetry of the mind, heart and soul, the sharp imagery of the world translated into sound, and both the simple and complex things represented sentimentally and at length.” – No Depression

“Portland songwriter Anna Tivel is a favourite over at Hearth. She’s a deft, clever songwriter with a knack for observing the small, subtle beauties of our lives.” – Kithfolk