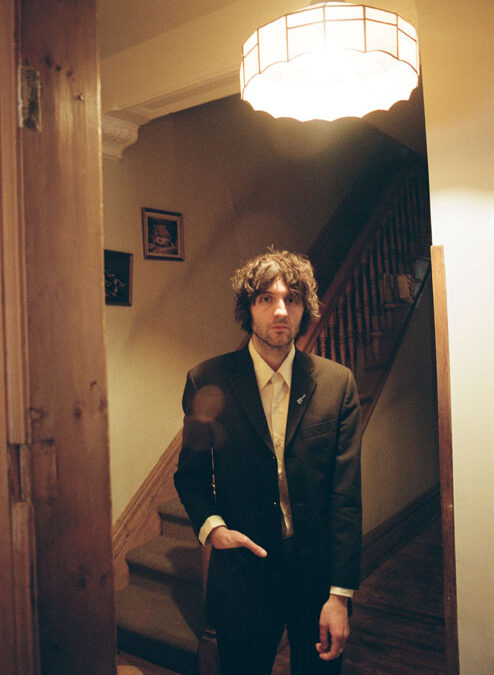 JERRY LEGER
“Jerry Leger has that spark in him that all the great songwriters have. He’s the real deal.” – Ron Sexsmith

“Time Out for Tomorrow has the compelling stories and great energy that I’ve come to rely on from this talented and prolific songwriter. Take the time to listen to Jerry Leger!”- Doug Paisley

Time Out For Tomorrow continues Jerry Leger’s run of consistently high output and displays the finely honed artistic vision that has been evident since 2005 when, at age 19, he released the first of nine studio albums, along with three more with his side projects The Del-Fi’s and The Bop-Fi’s. It’s added up to a body of work that was recently celebrated with the European-only compilation Too Broke To Die, aimed at Leger’s growing fan base in Britain and the EU.

Most of those listeners didn’t discover Leger until his 2014 album Early Riser, his first with Michael Timmins of Cowboy Junkies handling production duties, as well as the first to be released on the Junkies’ label, Latent Recordings. The combination of Timmins’ capture-the-moment production aesthetic and the Rolling Thunder-esque chemistry of Leger’s longtime band The Situation (plus a few special guests) now appears unbeatable. And although Time Out For Tomorrow may not be as expansive as Leger’s previous Timmins-produced effort, the acclaimed 2017 double album Nonsense And Heartache, its more concentrated dose of everything Leger does best is just as potent.

Songwriters such as Ron Sexsmith, Doug Paisley and outlets such as Rolling Stone, PopMatters and the Toronto Star have sung Leger’s praises. He’s also shared stages with The Sadies, Justin Townes Earle, Deer Tick, Tift Merritt, Dawes, and others.

Just The Night Birds’ Poetry Book
Jerry Leger about the book:
“This was something that I’ve been wanting to do since 2016, when I recorded a spoken word/jazz album called ‘Don’t Lose Your Beauty’, released under the name The Bop Fi’s. The book collects 85 poems (10 of which appeared on the Bop Fi’s recording) and is an extension of my songwriting but allows me to stretch out more. The romanticism of Leonard Cohen and the stream of consciousness of Jack Kerouac have been influences on me since I began to seriously write and this book showcases what I did with those influences to come up with my own style.”
Then on the musical side Jerry Leger also released a new single with Don Stevenson from the legendary 1960’s psych-country-rock group Moby Grape called “Halfway ‘Til Gone“.
PopMatters in the US had this to say about the song, “the tune is a subtle but important reminder of Leger‘s prowess with the pen. Think Lee Hazlewood or Everly Brothers at their finest. It’s a dreamy slice of pop/americana that is haunting and true.”