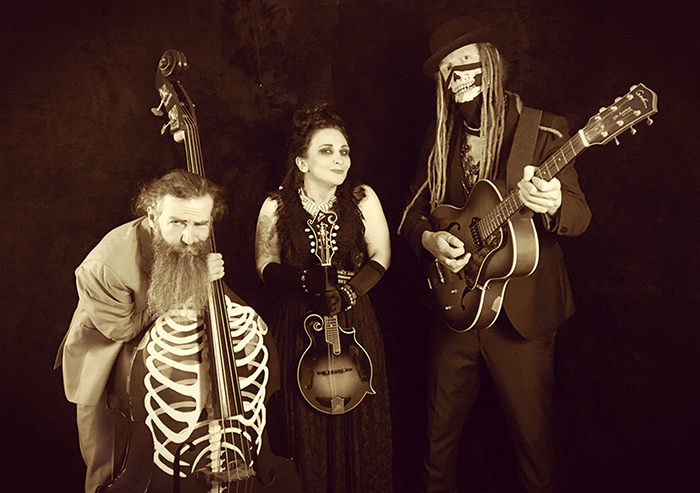 Telling tales of terror in old-timey fashion, singer Jo Carley is smack in the middle of the mix, with a snarl and a twinkle as she uses her sweet melodies to tell of terrible things.   This is made even more bewitching as she switches mandolin to washboard.  She is backed by her song-writing partner and husband Tim Carley, a man of considerable size who plays “syncopated rhythms to shake your soul” on a beaten up archtop guitar, kick drum and rattlin’ shoe, with friend and fellow fiend James Le Huray providing the final ingredients of the spell, in the shape of double bass and banjo.

‘Voodoo Bones & Vaudeville Blues’ (the bands third album) was recorded during lockdown in the bands tiny shack of a house on the East Coast of England.  When the pandemic hit, they threw out the couch and the TV, turning their living room into a recording studio, laying down twelve new songs using only old school techniques and a few good microphones.  There, they waited out the Lockdown until they could mix and master the recordings to ¼ mono tape with Ed Deegan at Gizzard Recordings in London.  This analogue and primitive way of recording totally captures the bands unique sound and the result is the bands most retro and authentic sounding record to date.  Rooted firmly in a bygone era when Voodoo and Black Magic were rife, it has all the vibe, sounds and character of the old Blues, Old-timey Country, Skiffle, Calypso and Rock n Roll records that inspired them to make this album.

“Jo Carley & The Old Dry Skulls were a joy to behold.  Rooted firmly in a bygone era when Voodoo and Black Magic were rife, the audience were all spellbound by the performance and its originality” – Adrian Blacklee – Blues Matters Magazine (UK)

“Tongue firmly-in-cheek they provide a full set of old school entertainment, a sideshow where vaudeville, blues and skiffle conspire to get their audiences to dance their asses off.” – Hans Werkman / Here Comes The Flood (NL)

“… they’ve conjured up some delicious spells in their cauldron of verse, complete with wing of bat and tongue of snake” – Graham Munn / Blues In Britain Magazine

“Don’t fight it, let your soul be taken by the voodoo and soothed by these irresistible bluesy rockabilly rhythms. Turn to the dark-side, even if its just for half an hour or so…” – Neil Hodge / Louderthanwar

“With great lyrics and the combination of haunting ragtime blues they create a stupendously enjoyable jaunt into the darker recesses of voodoo, … It’s superb fun and a real pleasure to just indulge in its lyrics and music…” – Lee Powell / Vive Le Rock 2021

“…a steaming broth of cabaret, blues, ska, Vaudeville, voodoo and skiffle. Horror stories are the main course, with a side orders of sex, trouble, and all-night parties” – Hans Werksman – Here Comes The Flood (Netherlands)

“…a magic potion made up from early 20th century blues and old-time, post-war skiffle and rock’n’roll, Don’t be scared, notwithstanding these weird times it’s only entertainment and we like it!” – Tom Keller / Folkworld (Germany)

“Being scared has never been so much fun. Eyes closed, lights out, music on. Then tremble and shake and then laugh.”  – Cultuurpakt (Belgium)