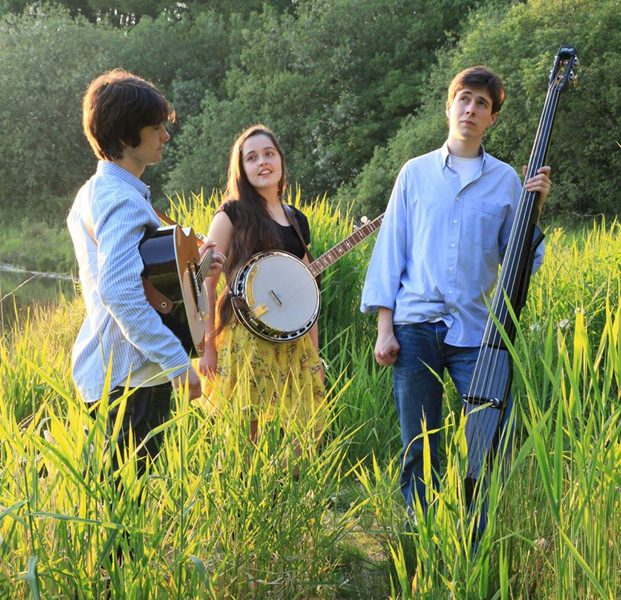 CUP O’JOE is two brothers, Benjamin and Reuben and their sister Tabitha, who play an energetic style of Bluegrass & Gypsy Jazz music. The siblings were raised on a healthy diet of music festivals and concerts from a young age and this influence is clear in their eclectic and enthusiastic performances. With Reuben on guitar and mandolin, Benjamin on upright bass, and Tabitha on banjo and fiddle, their music is a fusion of hard driving Bluegrass with a mix of Jazz, Old Time, and Swing. The trio has played at festivals and events all over Europe and are the first non US group to have been asked to play on the Youth Stage at IBMA in Raleigh North Carolina. They were recently nominated for the BBC Radio 2 Young Folk Award 2015.
Open House Festival, Belfast — “Even though they are still in their teens, their musical skills and prowess will make even the most seasoned musician take notice. Reuben, Tabitha and Benjamin Agnew could be mistaken for American-born-and-raised, but these three Armagh locals have merely caught a musical wind from the West and made it their own.”

Irish troubadour HUBERT MURRAY captures the essence of folk, blues and bluegrass at their finest. His blend of “Soulful Folk” encompasses raw talent and a refreshing new roots music sound. Hubert’s bluesy voice is packed full of energy and soul, accompanied by a mix of delicate finger picking and fiery hot flatpicking. Hailing from Co. Galway, Ireland, Hubert is currently based in London and is best known as the lead singer and guitarist of Irish bluegrass fusion band Lands End, and of London based old-time/ bluegrass supergroup The Hot Rock Pilgrims.

“Hubert Murray is one to watch for. Both a talented and inspiring songwriter and a fine instrumentalist with roots firmly planted in Bluegrass and Traditional Acoustic Country Music. He delivers his message with conviction and passion”. – Niall Toner, Roots Freeway, RTE Radio One.