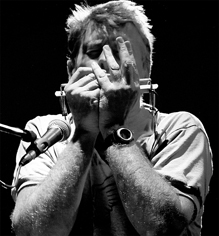 JOHN CRAMPTON: “… John Crampton does not so much approach the raw blues of howlin’ wolf, john lee hooker and bukka white with reverence as wrestle it to the floor and stamp his unique mark on it …” Blues Matters Magazine

” … John Crampton, an amazing one man blues band with steely reverberating guitar and harmonica galore … his playing was like a locomotive, his singing like an angry chainsaw as he steamed through his set …” BBC Southern Counties

” .. next was John Crampton … his blues are down and dirty … a voice sounding like an earthquake … we thought we had slipped way down south to the mississippi …” Mrs Yarirngton

” … John is one of those idiosyncratic British musicians like Lol Coxhill or Evan Parker maybe, who have taken a musical form, in this case blues, and adapted and evolved it into their own peculiar voice … john’s music is essentially blues but replaces the characteristics with his own idioms: shuffling 12 bar blues rhythm are replaced with up tempo 4/4 metronomically measured out on a simple foot pedal … instead of a formulaic flattened guitar chords, john’s playing is an eclectic mix of flamenco, West African ju-ju slide, country and punk … the tin guitar occasionally treated as a percussion instrument augmented by hand claps and foot taps … layered over this is Crampton’s gritty, growled minimal vocal and harmonica playing which again avoids blues stereotypes and harmonically adds to the range of the music creating a “big sound” like an Irish string section moving loosely along with the guitars …” Stalker Magazine

“… John Crampton just about brought the whole building down. This was a quite breath-taking performance by a phenomenal musician who brought the clamouring audience to its feet on more than one occasion and had everyone shouting for more. John is a complete orchestra of sound. Voice, acoustic, national steel, pick, slide, banjo, harp…he picks you up, shakes you warmly by the throat and throws you around the room while you try and hang on to your seat. This was exciting blues and blue grass of the very top quality. John’s intensity and furious attack is totally compelling and his skills totally beyond question. When a single artist sitting on a small chair on a big stage can get hundreds of blues fans off their heads with mad loud pleasure then he is pretty damn good. If you were at this gig you knew you were in the presence of a mighty talent. If you weren’t? Rush to the next one…” Blues Man in the Hat, Hebden Bridge Blues Festival Main Stage

” … amazing that this one slight seeming figure can stir up such a crescendoo of foot stomping blues and bluegrass. Slide guitar, banjo and harmonica by turns whipping up a storm of powerful sound round his astonishing voice. He really gets the place jumping. Come and see John Crampton. You won’t be disappointed …” The Mesmerist

“John Crampton … hang on to your britches, the hurricane is a headin’ this a way…” Hebden Blues Festival

” … you can practically fry eggs on the man as he radiates energy into the room … his gravel -gargling voice is a perfect compliment to his 1930’s national steel guitar, harmonica and footboard … the sounds he produces have astonishing depth …” Bill Grainger (Beaford Arts)

” … totally compelling … furious energy … he blew me away …” netrhytms