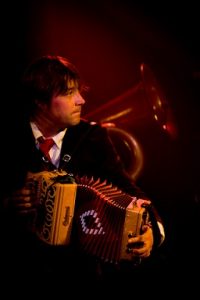 John Spiers, known better in folk circles as Squeezy, has made a name for himself as one of the leading squeezebox players of his generation.  Well known for his long-standing duo partnership with Jon Boden in the formidable Spiers & Boden as well as his contribution to the massively popular Bellowhead, John has also played with Eliza Carthy’s Ratcatchers and a number of local folk-dance bands.

John has always written tunes and music for the melodeon in the traditional style and many of them can be heard performed on the albums of both Bellowhead and Spiers & Boden as well as being played in folk sessions up and down the country and around the world.  He has only recently found time in amongst the heavy touring schedule to develop more of these compositions for performance as solo pieces and is keenly working on ways of marrying the infectious pulse of traditional English dance music with modern musical influences and take this vibrant music to audiences both at home and abroad.

The Guardian said of his first low-key solo outing at Cecil Sharp House “An uncompromising approach, maybe, but it worked, thanks to his blend of elegant, rhythmic and virtuoso playing and easygoing folk club banter.” … “a quiet triumph!”