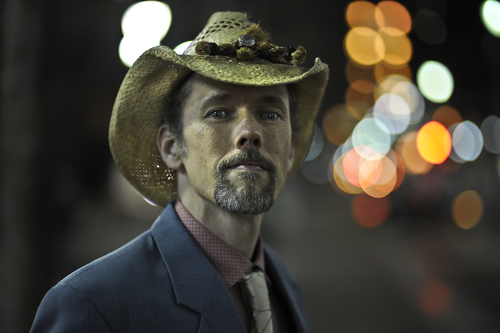 JONATHAN BYRD is “one of the top 50 songwriters of the last 50 years,” says Rich Warren of WFMT in the Chicago Tribune. Scott Alarik of the Boston Globe says, “This rootsy North Carolinian may be the most buzzed-about new songwriter in folkdom. He displays John Prine’s gift for stark little songs that tell big, complex stories, Guy Clark’s lean melodicism, Lyle Lovett’s wry mischief, and Bill Morrissey’s knack for the revealing image.” Byrd grew up singing in the Southern Baptist church, where his father preached and his mother played piano. After four years in the Navy, he returned to home to play in rock bands. It was at an old-time fiddle festival in the mountains of southwest Virginia where his writing began to change. Assimilating the sounds of southern traditional music, Byrd wrote new songs in an ancient style. After 10 years as a full-time touring songwriter and 7 acclaimed albums, it seems this native of Cackalacky is getting the attention he deserves. After the positive reaction to his last years tour Jonathan is back in June with his Pickup Cowboy Johnny Waken and it is not to be missed.

Support: MY GIRL THE RIVER are Louisiana born and bred Kris Wilkinson and her husband songwriter Joe Hughes.

After very successful support dates with Laura Cantrell, Jonathan Byrd, Cale Tyson and the exquisite Suzanne Vega (to sold out theatres) My Girl The River is looking forward to taking their music out to small, intimate venues. A very personal and engaging experience, Kris has said that the recent response during their Suzanne Vega tour was ‘overwhelming’. Told more than once they were ‘the best support we have seen with Suzanne who has impeccable taste in support artists’, they are excited to share more of their debut album with an audience who loves a great song, a great voice and being drawn in by a memorable show.