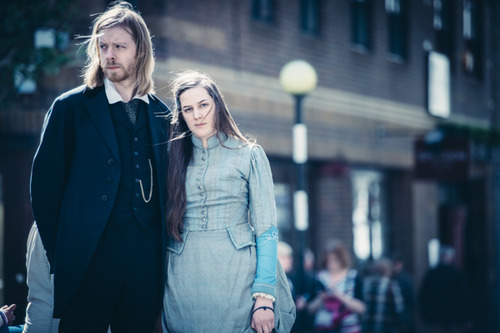 Praise for new album ‘Nothing Can Bring Back The Hour’:
‘A bold success’– The Telegraph
‘Clarke and Walker stand out due to their originality……impressive stuff’ – The Guardian
‘Thoroughly remarkable and unique’– Maverick
‘a wistful soundscape of longing….arresting stuff’ – Independent on Sunday

To win the Best Duo category at the 2015 BBC Folk Awards is quite an achievement at any stage of an artists’ career. But just two years prior to this accolade Josienne Clarke and Ben Walker were virtually unknown on the folk scene (or any other, for that matter). So their success is quite remarkable.

Four time BBC Radio2 Folk Award nominees Josienne Clarke and Ben Walker infuse ageless stories of love and loss with their exquisite command of many instruments. Whether interpreting words centuries old or singing her own authentic lyrics, Josienne’s jewel-­-like voice finds the nuance in the simplest phrase and sends it, effortlessly, straight to your heart.

Ben’s musical tact and flair for arrangement provide the perfect setting, allowing the song centre-­-stage. They met in July 2009 and together they have resolutely forged their own path through traditional music.

The live performance is a thing of delight -­- enchanted reviewers have spoken of shimmering cathedrals of sound -­- and its purity will stay with you long after the last note fades. Critical recognition soon followed, along with the Isambard Folk Award, and the FATEA Award for Best Album and Female Vocalist of the Year, and the Spiral Award for Best Duo. In 2013 their debut release on Navigator Records -­- Fire and Fortune -­- reached No.1 on the Amazon folk chart within three months, garnered rave reviews and a constellation of stars across the board, and brought them coveted BBC Radio 2 Folk Award nominations for Best Newcomers and Best Duo in 2014. Josienne Clarke and Ben Walker’s new album Nothing Can  Bring Back the Hour was one of the most anticipated releases of 2014 and reviews have been outstanding. It is nominated in the Best Album category at this year’s BBC Radio 2 Folk Awards along with yet another nomination for Best Duo.