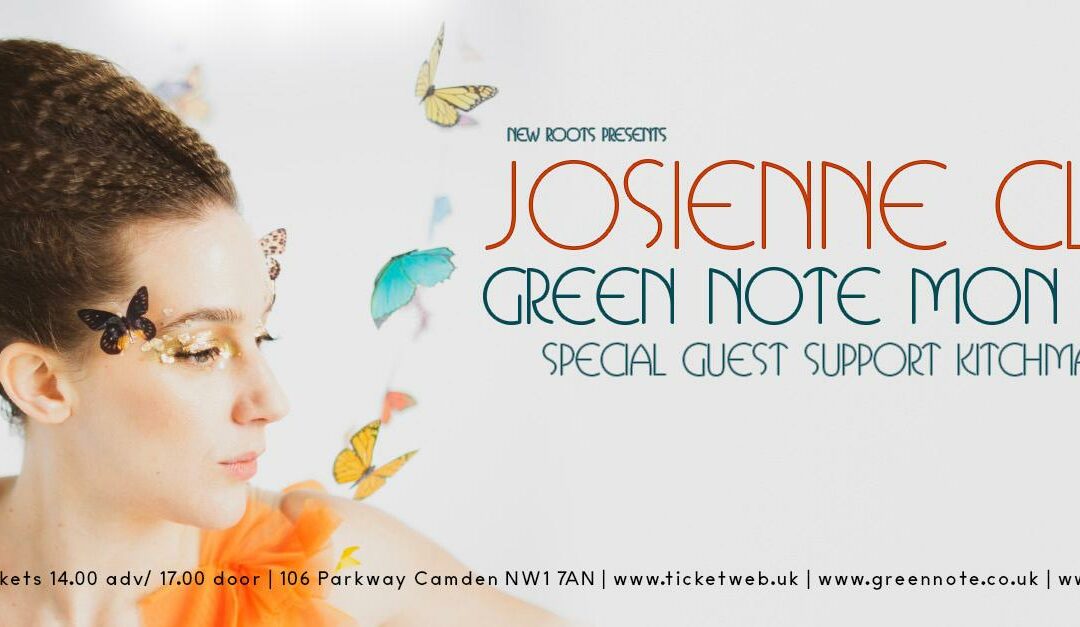 New Roots presents… JOSIENNE CLARKE with support from KITCHMAN SCHMIDT
JOSIENNE CLARKE has spent the past decade releasing critically acclaimed songs, winning the Radio 2 Folk Award in 2015, and going on to sign to the internationally renowned Rough Trade label. She has toured with Robert Plant, opening for him on his European tour, played prominent slots on some of the UK’s leading festivals, and had a leading role in The National Theatre’s revival of Timberlake Wertenbaker’s ‘Our Country’s Good’ , in which she performed her own compositions. Her music has been described as ‘extraordinary’ by Mojo, ‘gently exquisite’ by The Observer, ‘full of depth’ by The Telegraph, with ‘a voice that can trickle back over centuries’ (Cerys Matthews, BBC 6 Music).
In 2019 Clarke made the life-changing decision to leave her label, musical partnership and home for a small village on the outskirts of Glasgow. Starting afresh, she began to write and record once more, and the narrative arc of her new album A Small Unknowable Thing emerged. Clarke found herself again, after years of uncertainty and repression. ‘It was a conscious decision to walk away from my career as it was, and there’s a positive message on this record…I do know who I am, and I’m not interested in listening to what anyone else thinks they know about it. No one knows better than you what you think and feel. That’s what runs all the way through [the record].’
Like her other albums, A Small Unknowable Thing travels from despair to hope. While the themes might feel familiar to her many fans, the musical journey will not. Clarke takes in a wide a wide range of new and diverse influences across the album’s 14 tracks- from Adrienne Lenker’s ‘Hours Were The Birds’, IDLES  ‘Colossus’, Radiohead’s ‘Airbag’ to Phoebe Bridgers “Garden’ Song’, The Beastie Boys ‘Remote Control’ and Sandy Denny’s ‘Listen Listen Listen’ and more, the album’s touchstones span a vast musical collage of anger and hope.
Josienne Clarke’s decision to believe in her abilities, to walk away from the path others wanted her to follow, to demand equality, is one that has paid dividends. Her brilliant new album A Small Unknowable Thing is the shining jewel she brings back.
With support from KITCHMAN SCHMIDT.