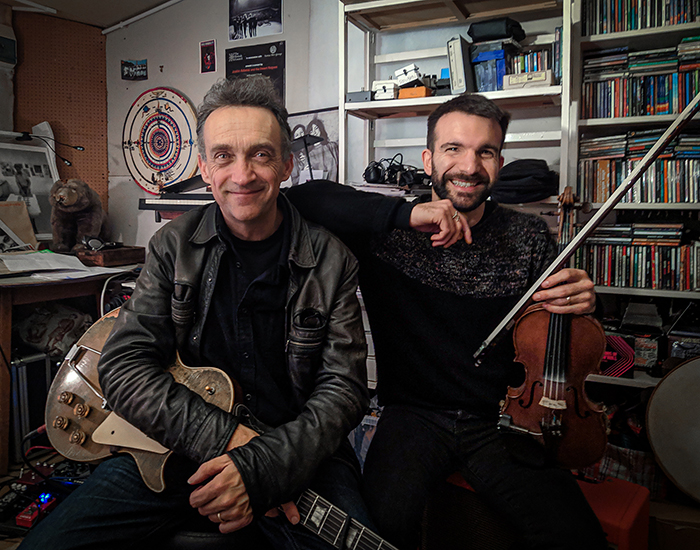 THIS IS A HYBRID EVENT WITH A LIVE AUDIENCE AND A LIVESTREAM AUDIENCE. Tickets for the live event are now sold out. The tickets available are for the live stream.

THE LIVE STREAM WILL BE AVAILABLE TO VIEW FOR 48hrs AFTER THE EVENT. ONCE PURCHASED YOU WILL BE CONTACTED ON THE DAY OF THE EVENT WITH MORE INFORMATION AND A LINK TO THE SHOW.

Justin Adams, guitarist, producer and composer, has been a chief collaborator with Robert Plant in his band, the Sensational Spaceshifters, co-writing a series of 4 albums and touring the world. His production on landmark albums by Tinariwen and Rachid Taha highlight his feel for North African groove, while his award-winning project with Gambian maestro Juldeh Camara, JUJU, linked griot tradition with raw blues spirit. His recent solo album of guitar atmospherics, Ribbons, was cited amongst the top 50 albums of the past decade by Songlines magazine.

Mauro Durante toured the world for many years with Ludovico Einaudi playing violin and frame drums. He is one of the leading players in the pizzica style of Southern Italy and leads Canzoniere Grecanico Salentino, who have played great festivals all over the world. Last year CSG were featured in their own concert at the BBC Proms (where Justin Adams guested with them) and they won Best Group in the Songlines Music Awards.

This new collaboration stems from a concert led by Ludovico Einaudi, the Notte della Taranta in Puglia, where the two first played together, recognising kindred spirits in the trance rhythms of Taranta which transcend “melancolia” or the blues. Together they create a raw, stripped-back sound that moves and mesmerises.

“Mauro Durante is a force of nature and culture”
Il Manifesto

“I met Justin Adams . I think that was a major turning point for me , to find a guy who could be so lyrical as a guitar player, and to have such amazingly beautiful roots of appreciation of music”
Robert Plant , Uncut magazine

“Spectacular performance from Mauro Durante: his experimenting on the tambourine allows him to make with one hand, what a percussionist might accomplish with a full drumkit. He perfectly knows spaces and resonances on his instrument’s skin, which seems to become his own”
La Voce