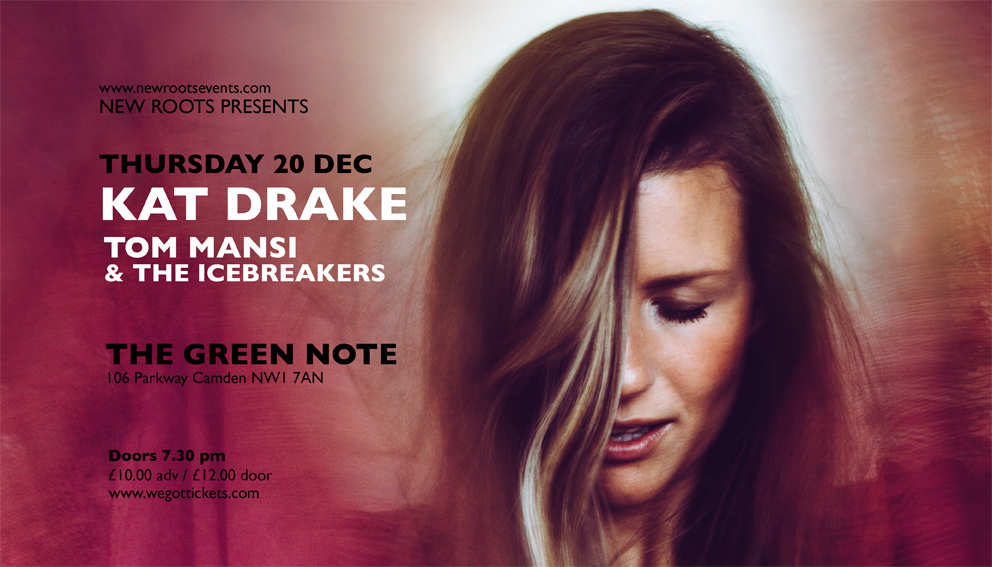 Kat Drake’s richly varied career has taken her to the stages of The Union Chapel, Glastonbury Festival and Secret Garden Party, amongst many others. Spanning a huge range of roots music, her recordings include a jazz album with Richard Hewson of the Rah Band, collaborations with Palestinian classical musicians in the West Bank, and singing with a live samba band in Argentina.

“The River Dart EP”, her first solo release, is a collection of songs that speak of her experiences of growing up in a big city, surviving the pain of heartbreak and loss, as well as her deep connection with nature. Rooted in traditional English folk music, with broader influence from the likes of Eva Cassidy to Joni Mitchell in the mix, it is the product of Drake’s longstanding collaboration with producer Stevan Krakovic and Tom Mansi & the Icebreakers.

Tom Mansi & The Icebreakers have spent the last 10 years honing their sound, playing countless shows across the UK and Europe. All three members are respected musicians in their own right, their careers ranging from collaborative work with legendary film director David Lynch to the British musical icon Donovan, and extensive time spent in the vibrant British Burlesque and alternative Cabaret scene. It is from these experiences that the band have forged their unique sound, channeling in equal measure the rock’n’roll spirit of Sam Phillips’ Sun, the electric blues of Howlin’ Wolf, the bass heavy jazz attitude of Charles Mingus, the noir themes of Tom Waits, and the electric energy of Captain Beefheart.

The three piece have performed at many of the best venues and festivals across the UK and Europe including Glastonbury, Secret Garden Party, The Big Chill, The Scala and Hammersmith Palais, and have sheared the stage with Son of Dave, Imelda May, Florence & The Machine, The Sadies, Fat Freddie’s Drop and countless more across their career to date.