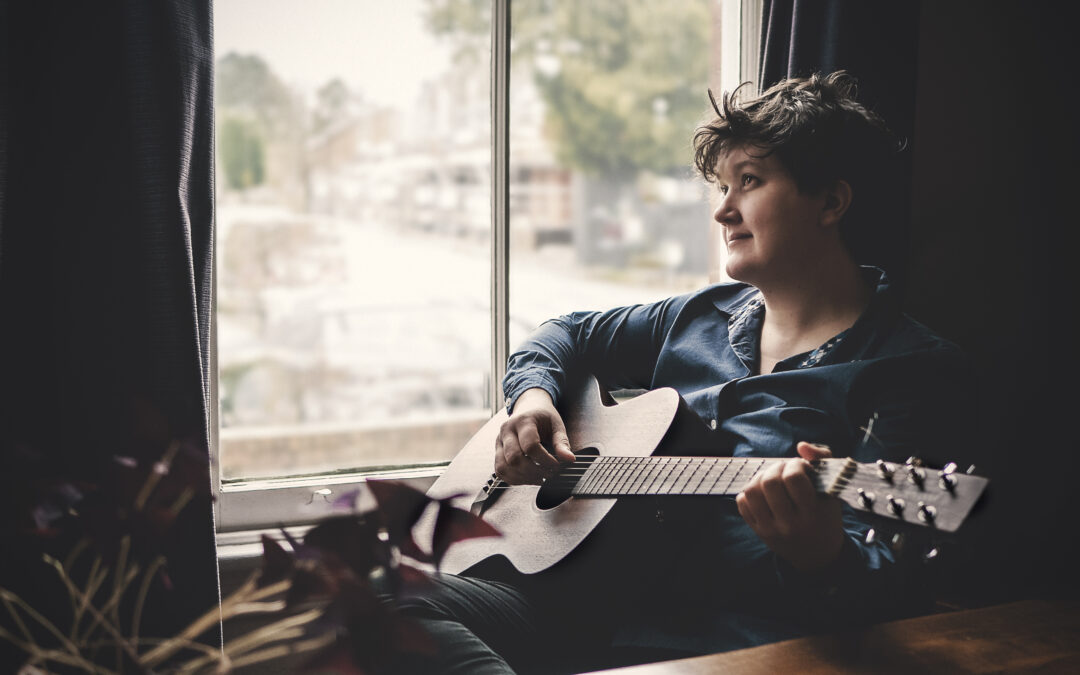 KATY ROSE BENNETT has been writing and performing her idiosyncratic brand of folk for over 20 years. October 2020 saw the release of her 6th solo album: ‘Where Does It Hurt? An Introduction to Katy Rose Bennett’.

There was a time in the early 2000s when Katy Rose Bennett (or KTB as she used to be known) was on the cusp of breaking through: she had been a finalist in the BBC Young Folk Award, she had performed on the main stage at Truck Festival with a 16-piece band and she had been invited to play at SXSW Festival in Austin, Texas on the back of the critical success of her quirky debut album, All Calm In Dreamland.

But then, aged 20, it all went a bit sideways – Katy’s mental health suddenly declined with the start of a cycle of brief manic episodes followed by seemingly endless months of silent depression, which continued for several years. All while she was theoretically studying for a music degree.

During these turbulent years, Katy wrote and recorded her second album, the aptly titled ‘Bluebird’ receiving glowing reviews, performing across the UK and again almost reaching that next level of success. However, her fragile mental health continued to hamper her career and confidence. She says of that time:

“One thing I remember so clearly was that, even though I could sometimes barely string a sentence together, I could still perform and sing every word of my songs.”

And what of those songs? Brought up on Patsy Cline, k d lang, The Beatles and whatever else her dad or older brothers were listening to, Katy began crafting her own particular brand of folk song in her early teens. She writes at the piano or guitar or a cappella and has a fondness for multi-layered vocals and jazz-infused harmonies.

After finishing her degree, and with her mental health improving, she continued to write, perform and record, releasing (with little fanfare) the rich and varied Indelible Ink in 2009. Resigned to the thought that musical success comes in your youth or not at all, Katy decided to turn her attentions elsewhere – she got married (well, civil-partnered), trained as a music therapist, got a proper job, started running community choirs, bought a house and became a parent. Songwriting and gigging became a hobby. On occasional weekends, over two years, Katy and her brother and long-time collaborator Joe Bennett (of Goldrush and Dreaming Spires) recorded a 4th album, the joyful and tender Songs of The River Rea (2016) inspired by life alongside Birmingham’s hidden river. Katy self-released the album – it got a few good reviews. And that was the end of that.

Except it wasn’t. A year later, Katy’s life imploded with the sudden onset of a bizarre and little understood condition, Functional Neurological Disorder. In Katy’s case, it caused her legs to stop functioning properly for significant periods of time, causing her to be often unable to walk. It changed everything. Katy quit her job as a music therapist and she found herself living with a friend for a peppercorn rent in a dilapidated, Victorian park keeper’s lodge in the centre of Birmingham.

“It was a strange time. In some ways the hardest period of my life, and yet also one of the most musically fruitful. I must have written nearly fifty songs in the year I lived there.”

With some of those songs, Katy released her 5th solo album, the raw and emotional ‘The Meantime’ in 2019, recorded live and mostly in first takes in Bristol with her friend Jim Cornick of Ersatz. What Katy realised was that, for her, writing songs and being a creative artist are not occasional hobbies.

“They are my reasons for being and my purpose in life. Connecting people through song is what I Iive for!”

Alongside the release of the new album, which comprises of songs from Katy’s considerable back catalogue and one new song, Katy will be releasing three singles and touring the UK. She will also be working with theatre-maker Francesca Millican-Slater to develop a music, song, story-telling and spoken word solo piece about her and others’ experiences of Functional Neurological Disorder.

And she will, of course, keep writing songs.