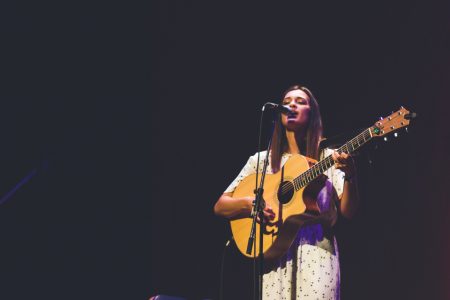 Kelly Oliver is a singer-songwriter, guitarist and harmonicist, described by The Times as an artist who ‘blends traditional with bold, indie-pop’. Her debut album ‘This Land’, funded by an Emerging Excellence Award by Help Musicians UK, gained a 4* review from The Telegraph and her second album ‘Bedlam’, as well as being included in The Sunday Times Essential New Releases, was in Paul Sexton’s Top 20 Albums of the Year in Prog Magazine and was nominated for Best Album from a Female Artist 2016 by Folkwords. Her last five singles have all gained BBC Radio 2 and BBC 6 Music airplay and she performed her summer single ‘Rio’ on BBC One’s Sunday Morning Live for her first national TV appearance.

A mixture of original material and traditional songs, Kelly’s debut album ‘This Land’ was funded by an Emerging Excellence Award from Help Musicians UK and was released in 2014 by Folkstock Records. It gained her a Best Album By A Female Artist award from Folkwords, 4* album reviews from R2 Magazine and The Telegraph Music and was included in The Telegraph’s 68 Best Folk Albums of 2014. It features legendary fiddle player Dave Swarbrick and also earned a nomination for FATEA Magazine’s Best Debut Album of 2014.