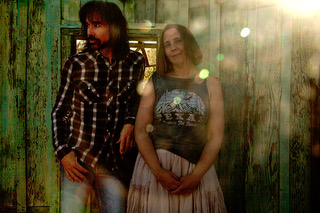 Kirsty McGee (UK)
With influences ranging from Louis Armstrong to Lhasa de Sela, Mulatu Astatke and Sister Rosetta Tharpe and a great love of the Great American Songbook, McGee’s own voice has been described as having the texture of ‘smoke and velvet’. Her ever-evolving, soulful sound has been described as ‘filmic, joyful and dirty with hints of gospel and blues’ and she continues to produce music that is hard to categorise but difficult to ignore.

Robert Garson (US)
Robert Garson was born in Arkansas and raised in the San Joaquin Valley in central California where his folks danced to Merle Haggard and Buck Owens performing at the Big Fresno Barn. He now resides in the high desert of Southern California near Joshua Tree. Steeped in the traditions of country, bluegrass and rhythm and blues, he marries ancient and new lyric sensibility to the deep grooves heard in roadhouses from Bakersfield to New Orleans.

Named after a Sonoran desert plant whose crimson rainflowers earn it the nickname ‘desert coral’, Ocotillo brings together the voices and songwriting of Kirsty McGee (UK) and Robert Garson (US). The duo formed in 2015 in Joshua Tree, deep in the Mojave desert when McGee turned up at Garson’s studio carrying a musical saw.  After a successful 23-date debut tour in 2016, the duo return with a brand new double album. A unique partnership not to be missed.
“The harmonies gel like Gram and Emmylou’s; the music, a thieved midget’s orchestra of offbeat instrumentation. When the writing’s this good, though, the sky’s the limit.” 5* Review of Ocotillo at The King’s Arms, Salford 02.03.16 Salford Online (Danny Moran)