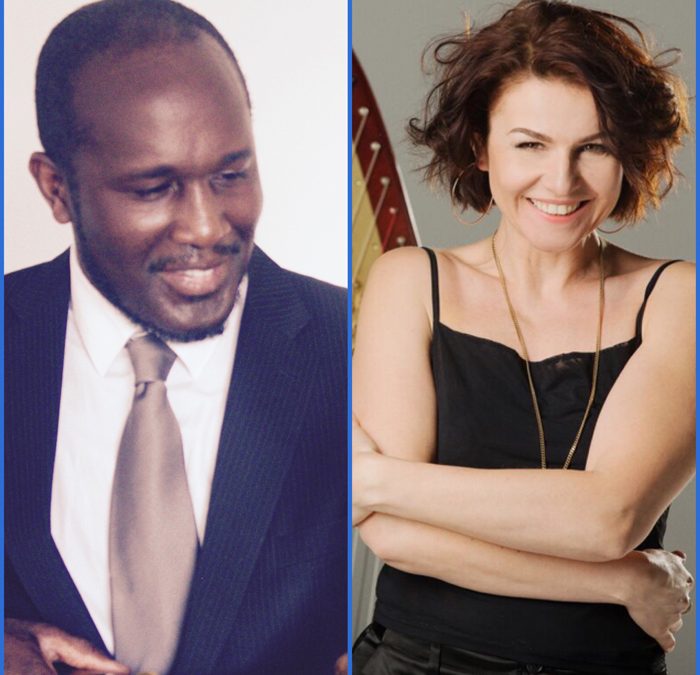 “…Bzhezhinska – an artist to watch.” ★★★★ Evening Standard 2018
“There is so much respect in jazz circles for Tony Kofi.” Jazzwise

Together they showcase their musical skills through the art of beautiful melodies and jazz harmonies, within a truly intimate performance.
The show features the timeless tunes of John and Alice Coltrane, Dorothy Ashby and Duke Ellington, as well as vast of original compositions from their recently released album Inspiration.

Having ‘cut his teeth’ in the “Jazz Warriors” of the early 90’s, award-winning saxophonist TONY KOFI has gone on to establish himself as a musician, teacher and composer of some authority. Tony’s playing has also been a feature of many bands and artists including “US-3” World Saxophone Quartet, Courtney Pine, Donald Byrd, Eddie Henderson, The David Murray Big Band and Sam Rivers, Andrew hill, Ornette Coleman, Nu-Troop and Jazz Jamaica. His fluent and fiery hard-bop soprano/ alto/ tenor/ baritone playing is constantly in demand. His new album Point Blank release is on 31st of August this year.

Originally from Ukraine/Poland and now based in London, ALINA BZHEZHINSKA is an internationally renowned harpist. She has performed with leading classical and jazz musicians such as Shabaka Hutchings, Django Bates, Miguel Atwood-Ferguson and the Glasgow String Quartet. Her duo, with award-winning jazz vocalist Niki King, has supported Gregory Porter.

Alina’s critically acclaimed Quartet appeared at the EFG London Jazz Festival in a special triple bill featuring Denys Baptiste and Pharoah Sanders – ‘A Concert for Alice and John’ and has been nominated for Best Live Experience of the Year at the 2018 Jazz FM Awards.
Alina has recorded a solo album called Harp Recital and is featured on recordings by the American harp ensemble Harp Fusion and the Scottish jazz group New Focus. Her new album, Inspiration, was released in June 2018 through Ubuntu Music.