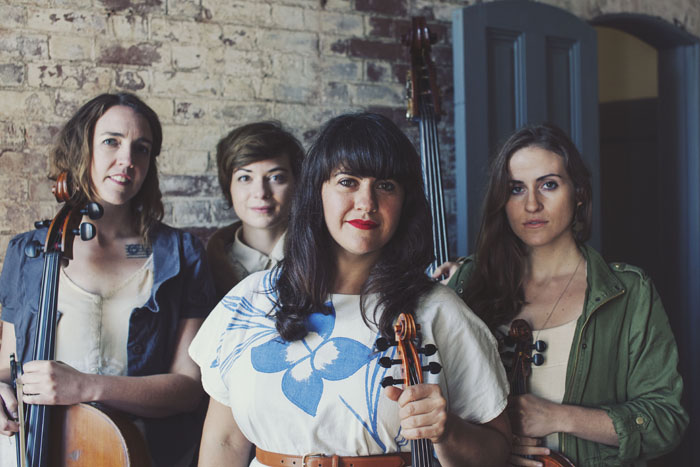 Laura Cortese: Laura Cortese digs deep and aims high, grew up in San Francisco and moved to Boston to study at Berklee College of Music, immersing herself in the city’s vibrant indie music scene and enjoying a busy touring-and-studio-sidekick career which included appearances with Band of Horses at Carnegie Hall and Pete Seeger at Newport Folk Festival. But, it’s been with her band, The Dance Cards that she has made the biggest impact. It’s bold and elegant fare, schooled in the lyrical rituals of folk music and backed by grooves that alternately inspire Cajun two-stepping and rock ‘n’ roll swagger.

Writing in RnR magazine, David Innes awarded them his “Most Memorable Gig of The Year” vote saying they “swung with constraint-free exuberance, tugging at and capturing everyone’s hearts.” Songlines magazine drooled: “This was a celebration of American string playing par excellence.”

Since then, the four-piece has taken both Shetland and Orkney Folk Festivals by storm, and are back in the UK for festival appearances and tour dates.

The band kicked off 2018 in style, flying in for two big shows at Glasgow’s Celtic Connections festival, promoting their current album, California Calling, on Compass Records, which has been winning them rave reviews and much radio exposure. It was Album of The Week on the Radcliffe & Maconie show at BBC Radio 6.

Awarding the album a 5-star review (there were many) at Acoustic magazine, Julian Piper called it “stunning” and added: “If there was any justice, you’d see Laura on Later with Jools next week.”

Jess Morgan is a songwriter’s songwriter. Her latest album is a tumbler of unfancied, gutsy song. Her melodies will ring in your ears for days and her stories will play on your heart long after that. The album comes out with Drabant Music and Jess is currently the Norwegian label’s only British artist. April 2017 saw the release of album Edison Gloriette, a record about love and lonliness – made for anyone who’s ever been a bit of a nighthawk at any one time or another. BBC Wales linchpin Adam Walton said on first play – “it’s a blinder.” Glasgow’s The Skinny called her, “a songwriter who lives her craft truer than many of her contemporaries.”

Jess will release new material in 2018 and will support A-ha! on their MTV Unplugged tour including dates at Spektrum in Oslo and the O2 Arena in London – the biggest shows to date for this meticulously hands-on artist artist, who makes her own playable 7″ records at home in her kitchen. The 405 called her “a true DIY artist in her element. Seriously, she does it all.”