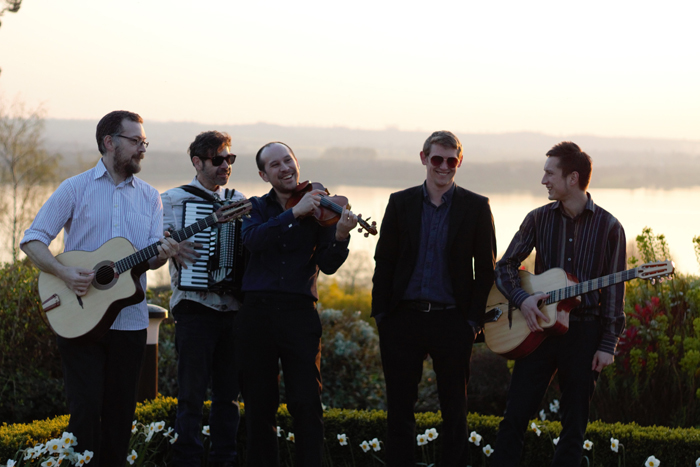 Manière des Bohémiens play improvised Django Reinhardt, Stephane Grappelli influenced Gypsy Jazz and Eastern European swing. They are the most debauched, ecstatic and downright amazing live band you will have seen for a long while.

Gypsy jazz played with the jaunty abandon of a misspent youth and a broken heart arranged for 5 virtuoso musicians who travel around playing the violin, guitar, sax and double bass whilst dipping in and out of Parisian alleyways and absorbing pieces of the colourful lives they meet along the way. They have been entertaining the folks of Nottingham and far beyond for many years with their infectious blend of improvised, manouche jazz and rough-edged, virtuosic eastern-european gypsy-folk music.

Formed through a mutual love of gathering round warm festival bonfires and improvising, Maniére des Bohémiens spent many hours working together on the distinctive swing sound and many more on learning the melodies and developing them through improvisation.

Manière des Bohémiens’ current line-up of Rob Rosa – Violin, Roger Rosa & Rob Coates – Guitars, Matt Marks – Accordion and Mark Houlgate – Bass have now collectively played over 400 shows which has created a tight, energetic sound which has made people get up on their feet up and down the land. They have made many festival appearances including Boomtown, Port Eliot Literary Festival and Elderflower Festival. They’ve also appeared at Bestival, Camp Bestival, Summer Sundae, Matt & Phreds, Kendal Calling, Limetree, Headstock, Larmer Tree, Towersey Folk and Fire in the Mountain to name a few. They are regularly the headline act at their hometown Nottingham gigs and have also had support slots for Jools Holland, Polar Bear and Quantic. They’ve been played on 6 music several times and have been included on Tom Robinson’s ‘best of Introducing’ podcast.

The word of mouth galvanising this band has been phenomenal and since their first big gig in October 2009 their following has grown resulting in packed out gigs left right and centre. They get people on their feet and have been attracting many ‘Lindy Hop’ dancers who turn up, do their thing and get the dance floor moving!