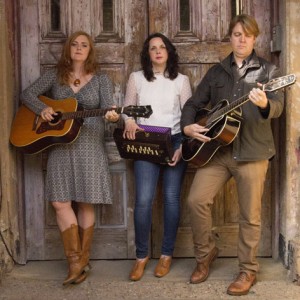 Mariah Wade present unique and beautiful interpretations of traditional Irish and old time American songs, interspersed with their own carefully crafted compositions. Formed of three long-time compatriots Catherine Doogan, Mary Quinn and Glenn Cumiskey they weave together stories on acoustic guitar with vocal harmonies that run as deep and clear as a mountain stream. Their music defies easy categorization – it embraces the pre-eminent ambassadors of traditional Irish, folk, Appalachian and country music.

Tim Jones and The Dark Lanterns are “rooted in the songs and tunes of English traditional music, but telling their own stories from edgelands of London and beyond.”

Forged in the folk clubs of North London, the band are influenced by the traditional singers and folk music of the UK, and use this sound to help Tim Jones’ songs come to life. Whether in the a capella Harringay Races, Her Long Red Hair’s shape-shifting fairy tale, or the boozy singalong of the title track, a sense of the stories and melodies that underpin folk music runs through all the songs.