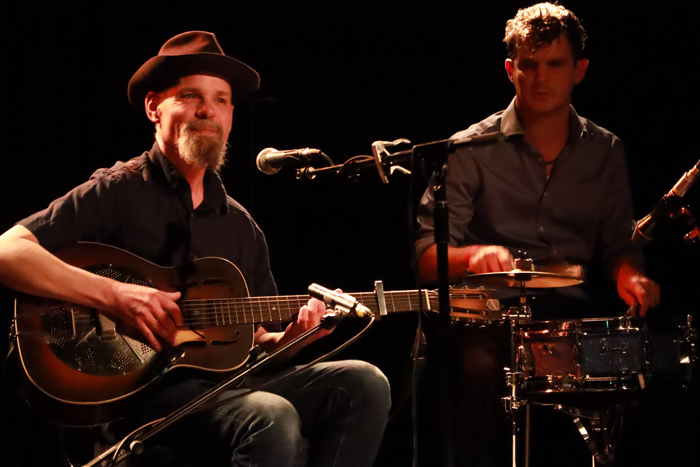 MARK HARRISON: There is no one in music quite like Mark Harrison. He is widely considered one of the most original and interesting artists currently operating in the UK.  His highly individual, all-original music goes down very well with audiences of all kinds, and it has taken him to some of the top venues and festivals in the UK, attracting acclaim wherever he goes. Recent appearances on BBC Radio 2, as guest on Cerys Matthews’s show and on Anneka Rice’s Pick Of The Week show, have further added to his growing reputation.

A thrilling, rhythmic, finger-picker and slide player, with a very distinctive style.  Mark tours extensively. He has appeared at top festivals such as Celtic Connections, Bearded Theory, The Great British Folk Festival, Lakefest and Jazz FM Love Supreme and at prestigious venues all over the UK. He has released six albums which have been unanimously acclaimed across a wide range of areas of the music world, receiving a very great deal of airplay and highly enthusiastic reviews in the UK, Europe and the US.

‘The more I listen to Mark Harrison, the more I admire the man. He’s a fantastic musician, he’s got a great voice and what a songwriter! He’s kind of reinvented the blues in this country. What a glorious sound he makes’  (Frank Hennessey, BBC Radio 2)

‘the playing is of the sort of standard that most players take years to fail to achieve…… He is a unique musician, and I really don’t think that there is a musician that can hold a candle to him at this time’  (Music News)

‘he has a wonderful ability to take unexpected subjects, twist and tune them up with humour, innovation and downright originality’ (Cashbox Canada/Elmore Magazine US)