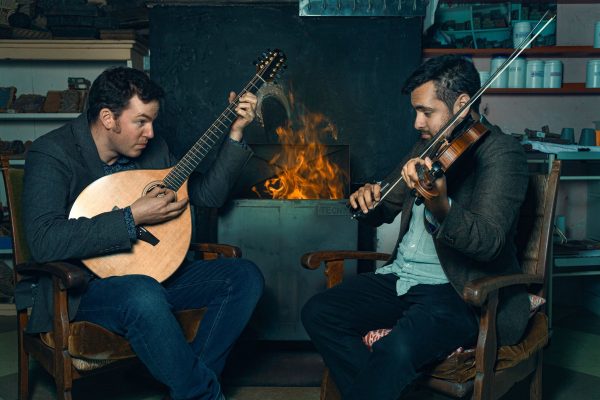 Matt Tighe and Tad Sargent are a highly acclaimed duo on the traditional and Irish music scene performing their own arrangements of traditional and original tunes in addition to songs that have been collected around the session scene of the UK.

They started playing music together whilst one was just fifteen years of age and the other was twenty five. Matt, the youngster of the duo on fiddle with Tad taking up duty on bouzouki and bodhran, met at the infamous Slough pub, “The Herschel Arms”. The legendary landlord, Tom King, hosted regular sessions that brought together members of the Irish traditional musical community from all over the world.

The Duo have been playing gigs around the country including two sold out shows at the famous Green Note in London, a headline slot at the National Piping Centre for Glasgow’s Celtic Connections, and a support slot for Kathryn Tickell’s Darkening on the main stage of Broadstairs Folk Week to name but a few!

Living in South London and born to an Irish and Trinidadian background, Fiddle player Matt Tighe is quickly making a name for himself in the world of folk and Traditional music. Now twenty one years old, he has been described as a, “fiery virtuoso”, and has already had an extensive experience in performance, playing at many festivals and clubs within the UK and Ireland.

“Tad is one of the most versatile bodhran players, accomplished backers, and knowledgeable trad musicians in the London market. But beyond his elite musical ability, his spirit of collaboration is second to none. ” Bill Barclay – Musical Director at Shakespeare’s Globe Theatre
London Born Tad Sargent, whose family roots come from Castlebar in county Mayo, started playing music at a young age on the piano. He started playing the bodhrán (the Irish drum) in 2002 after re-discovering his childhood love for Irish music.