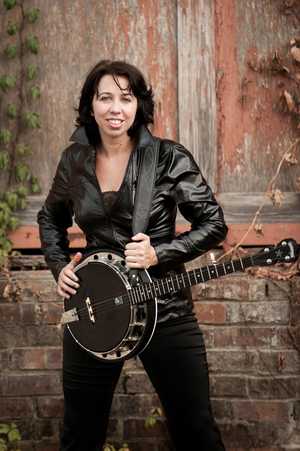 MEAN MARY: Award-winning musician/writer and fan favorite (over 11 million views on her YouTube videos), Mean Mary, literally grew-up in music. She evolved from a child prodigy who played for tips on the streets of Nashville (“startling talent” said the Tennessean) to a seasoned performer and headliner of over 4000 festivals and concerts (“the voice of a ragged Angel combined with the banjo playing of the Devil” says No Depression).

Deering Banjo’s named her their Goodtime Ambassador, and Janet Deering describes her banjo playing as giving her “chills.” Equally versatile on guitar, fiddle, and 8 other instruments, Mary is known internationally for her lightning-fast fingers, haunting vocals, and intricate story songs. As a high-energy performer that thrives on variety and as a songwriter that chooses unusual subject matters, anything from ghost pirates to demon guitars could romp through a Mean Mary show.

“Her personality and energy light up the room and the crowd goes crazy.” Chris Lash, Radio Veteran, WDAP, WWON

“Fantastic. I had chills from hearing your wonderful playing! Five Stars for sure!” Janet Deering, Owner/CEO, Deering Banjos

REBECCA HOLLWEG:
‘Just a beautiful sound, great vibe’, Janice Long on BBC Radio 2. ‘Akin to an old Brill Building songsmith, Carole King couldn’t have written a better pop song’, UNCUT ****
London based singer-songwriter Rebecca Hollweg has Janice Long and John Hegley among her many fans and her 2 albums have been played on BBC Radio 2.
Live, she is warm and unpretentious, and as one listener said ‘it feels like she is reaching out and enfolding you in a warm embrace’.
With a resume ranging from support tours for Roger McGuinn to BBC Radio 4’s ‘Loose Ends’, she appears here with her husband and producer Andy Hamill on double bass (Laura Mvula, Natacha Atlas, Rumer).