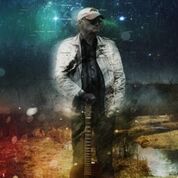 MICHAEL CHAPMAN first became known on the London and Cornish folk circuits in mid-1966. Playing a blend of atmospheric and autobiographical material he established a reputation for intensity and innovation. While living in Hull, East Yorkshire, in late 1969, he signed to EMI’s Harvest label & recorded a quartet of classic albums. LPs like ’Fully Qualified Survivor,’ ‘Rainmaker’, ‘Window’ and ‘Wrecked Again’ defined the melancholic observer role Michael was to make his own, mixing intricate guitar instrumentals with a full band sound.

He is one of the UK’s best known finger picking style guitar players. As part of a continuing musical lineage that includes the likes of Ralph McTell, John Martyn, Davey Graham & Bert Jansch, Chapman is still touring and recording and his playing is on top form.

Classics from the Harvest / EMI era. ‘Rainmaker’, Fully Qualified Survivor’, ‘Wrecked Again’, ‘Window’ & ‘Playing the Guitar The Easy Way’ have all been reissued by USA label Light in The Attic as a complete series of his early work . (Format: Vinyl and CD.)

Leeds born guitarist and singer, Dariush Kanani has quickly won the respect and admiration of some of the biggest names in the world of the steel string acoustic guitar. The young guitarist has performed over the years with Clive Carroll, Wizz Jones, Stefan Grossman and earlier this year was invited by Pentangle singer, Jacqui McShee to join her band, Jacqui McShee’s Pentangle to play a special commemorative show for the 1969 Isle Of Wight Festival which the original band played back in the day. Guitar legends Bert Jansch and John Renbourn were part of the original lineup, two of Dariush’s greatest influences.

Dariush also studied with the late John Renbourn who passed away in March 2015. In 2016 Dariush was invited by Pentangle singer, Jacqui McShee to play at special tribute concert celebrating Renbourn’s life at Cecil Sharp House in London.

Dariush has studied and taught extensively with American guitar virtuoso, Stefan Grossman, who has been a strong mentor for Dariush over the years. He lives in London and is currently busy writing new material.