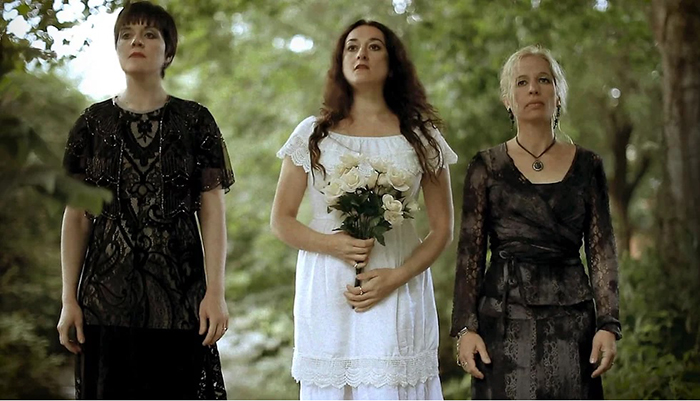 Michell, Pfeiffer & Kulesh are a new all-female close harmony folk trio that brings together the exciting talents of Odette Michell, Karen Pfeiffer and Daria Kulesh. Their debut single, The Cossack’s Bride, aims to showcase the uniqueness of this cross-cultural, multilingual collaboration, turning familiar folk tunes into something fresh and powerful.

Odette Michell is an award-winning British folk singer and songwriter who’s sound is deeply rooted in the English folk tradition. Her 2019 debut album ‘The Wildest Rose’ was met with critical acclaim, making several of the end of year best-of lists. Odette has since appeared at Celtic Connections, has headlined two solo UK tours and was winner of the ‘Female Artist of The Year’ at the 2019 FATEA Awards.
Karen Pfeiffer burst on the British folk scene only four years ago as one half of the Anglo-German duo Paul Walker & Karen Pfeiffer. Having extensively toured their shows in the UK and around the world, Karen is wooing audiences not only with her natural theatricality and life affirming playful energy, but also with her “seriously impressive, mezzo-soprano voice: one that would not be out of place on the opera stage.” (The Living Tradition). The finishing touches to have audiences melt in her hands are her oatcake-induced Swabian-Staffordshire accent and her legendary German humour.
Daria Kulesh has been described by Mike Harding as “one of the finest voices and one of the most intriguing and interesting songwriters on the present folk scene”. Mixing her Eastern roots with Western folk influences, she creates an original and exciting sound, full of passion and magic – a celebration of her Russian and Ingush (North Caucasus) heritage. She has toured extensively and has three award-winning solo albums to her name