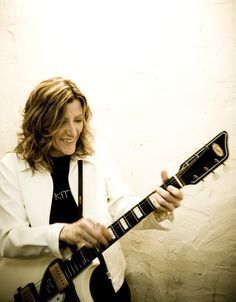 “Malone emerges, not as an ingenue, but as the definition of the Atlanta rock sound–Southern, blues-touched, guitar-driven, but still about the song.” – No Depression

Compared to most musical artists in the Americana genre, MICHELLE MALONE seems like a pair of distressed blue jeans amidst a sea of pantsuits. Unlike the surplus of self-professed rootsy rebels, one listen to this woman from Dixie and you know you’re hearing the real thing. Credit Michelle Malone with doing things her own way for the better part of the past three decades, and defying expectations in the process.

She’s had her share of success, courtesy of some 15 studio albums, her own independent SBS Records label, numerous top flight film and TV soundtracks, kudos from the critics and collaborations with a remarkable roster of amazing artists, among them, the late Gregg Allman, ZZ Top, Ellen DeGeneres and the Atlanta Symphony Orchestra. Chuck Leavell, the master keyboardist who has backed both the the Rolling Stones and the Allman Brothers, cited her as “One of the best female vocalists I’ve ever heard.” It’s little wonder that Guitar World once hailed Malone as “Equal parts guitar slinger and sweet songstress, with masterful lyrical introspection –sublime to raucous.”

A singer, songwriter, guitarist and producer whose music is informed by blues, roadhouse rock & roll and Georgia soul, Malone’s stunning and stirring new album Slings and Arrows (Due 3/2/18 on her SBS Records) pushes the parameters even further. It’s upbeat, defiant, and jubilant, flush with the raw energy and emotion that’s always been a part of her signature sound all while nudging her deeper into some personal new territory she hasn’t explored before. Malone deals with issues that have been burned into her psyche and affected her deeply. These songs speak to desire and disappointment, optimism and awareness, all with a driving and fiery conviction. “It wasn’t planned that way”, she insists, “but inevitably, that’s how the album evolved”.

1.2 million miles, 2,800 shows, and fourteen years of flying solo is quite a road trip. SARAH PEACOCK bridges gaps between Country, Blues, Americana, and Rock-N-Roll. Her music is raw, truth telling, and fiercely unique. Held hostage by her record label at 21, the troubadour life came with a rude awakening for the young Georgia native. Peacock made her home in a ‘92 Volvo with her dog and a guitar, and for nearly seven years earned a living in the corner shadows of American dive bars. The tables turned in 2011 when an anonymous fan helped Peacock buy out of her recording contract. Since then, she has released six additional albums and won multiple awards for her song writing. “Hurricane” won Best Song in the American Song-writing Awards, and “Beautiful” was a winner with International Unsigned Only. “The Cool Kids” and “Are We There Yet” have nominated her for Best Female Artist and Best Song in a number of song-writing competitions. Peacock was also named Listening Room Network’s Artist of the Year.

In 2013, Peacock released her self-produced album, Albuquerque Sky, recorded in hotel rooms across the country while maintaining her rigorous 250 show tour schedule. Albuquerque Sky was followed by a season of goodbyes, tremendous growth, and challenges, and became the catalyst for her next album, Dream On(2016). “This record helped me get un-stuck. I had a collection of live recordings which became Dream On. After such a creative dry spell, I knew I needed to hit the road and stay out a while –reconnect with my fans,” says a determined Peacock. “I found thisold silver eagle tour bus in Austin, TX. I was so enchanted with it, and the renovation process really reigniting my troubadour flame. So I bought my very first bus. Oh, what a feeling!” But less than 4 months later, she would watch it burn to the ground at a California truck stop.

One of Peacock’s fans voluntarily initiated a fundraiser, which is what kept her on the road. Another fan, so touched by her story, donated his motor home so that her tour could go on. That special connection between Sarah Peacock and her fans is what gives her the strength to continue overcoming. “You have to be unstoppable, even when you don’t believe you are.” That’s the modus operandi for the now half Tennessean, half Texan road warrior.

Sarah Peacock is active in the anti-bullying community, and her song, “The Cool Kids” has become a powerful anti-bullying anthem. Its message has taken on a life of its own. As she travels the country, Peacock shares her story in schools, empowering young people to embody her message of kindness and love.