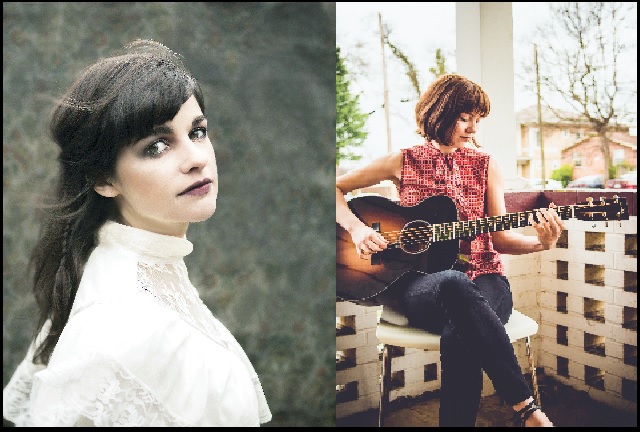 MOLLY TUTTLE speaks softly. Her voice is both lilting and lucid, and when she says that she wants to create music that is truly original and unmistakably hers, her quietness shifts into a steely audacity that’s charming and almost funny––she’s only 24, after all. But then, you remember her songs. And it hits you: brash, beautiful originality is exactly what Molly is doing.

“I love coming up with interesting guitar parts that don’t really fit––that don’t sound like any specific genre or any other guitar players,” Molly says, home in Nashville the day before heading back out to tour. “I am hoping to create my own sound. To find some new ground.”

On her debut solo EP Rise, Molly reveals the rich new ground she’s discovered. Produced by Kai Welch (Abigail Washburn, Bobby Bare, Jr., the Greencards), the seven-song collection relies on a rock-solid bluegrass foundation as Molly breaks free without breaking ties, singing and exploring what her six-string acoustic guitar can do. “This album was a big learning process for me,” Molly says. “I knew Kai would know directions to take my songs that would push me a little outside of my box. I grew a lot more confident in the direction I am heading as an artist.”

Rise further introduces Molly to a roots music audience who’s already enthusiastically embraced and elevated her. A Momentum Award from the International Bluegrass Music Association in the instrumentalist category rounded out her 2016, after she clinched first place in Merlefest’s prestigious Chris Austin Songwriting Competition. Appearances at top-tier festivals including RockyGrass Festival and on programs such as A Prairie Home Companion have expanded her audience, along with almost nonstop touring. Press response has been glowing: a Flatpicking Guitar Magazine cover was followed by praise from The Bluegrass Situation, No Depression, American Songwriter and others. Mostly recently, she’s grinning somewhat slyly on Acoustic Guitar magazine’s April 2017 cover.

Molly was ready for the attention. She began performing publicly at 11 and recorded her first album at 13. Her father Jack Tuttle has taught music in California’s Bay Area where she grew up for more than 30 years. “I really looked up to him,” Molly says of her dad. “I always heard him playing music when I was growing up.” A multi-instrumentalist––she also plays the banjo––Molly felt drawn to the guitar early. “When I was 8, I asked for a guitar, and my dad brought me home a little Baby Taylor and started showing me some simple things. From then on, I was taken with the guitar. It just seemed really natural to me.”

Not one to lounge in what comes easily, Molly decided to challenge herself by attending Berklee College of Music in Boston. “I wanted to deepen my knowledge of music, and Berklee seemed like a great fit,” she says. “They have an American roots program, which was great for me coming from a bluegrass background, but a lot of my guitar teachers were electric players who specialized in jazz and contemporary improvisation. They really pushed me to learn theory and get out of my comfort zone.” After graduating, Molly made the move to Nashville.

Anchored by her lucent vocals, smart writing, and incredible flat-picking, Rise is a direct reflection of Molly’s personal and artistic growth over the last several years. A sense of longing––for someone, for a feeling, for a state of being––pulses throughout the EP. “The songs were written over a long period of time, but throughout it, I was experiencing a lot of transitions in my life,” she says. “Going off to college, then moving from Boston to Nashville. All of this music was written from a place of dealing with a lot of change.”

“Good Enough” kicks off the EP with effervescence and wry self-awareness. Molly’s bluegrass roots are on proud display: her nimble acoustic guitar is joined by a rolling chorus of strings as she ponders the concept of satisfaction. “The idea for ‘Good Enough’ was inspired by writing songs––just never feeling like they are finished and wanting to work and work on them,” Molly says. “It’s also rooted in the discomfort of being a musician in general, having some doubts in the back of my mind about whether or not I and my music are good enough.” Ultimately, the song urges self-reliance and trust. “It’s about finding that place where success and what people say doesn’t matter,” she says. “You’re just satisfied for yourself.”

If “Good Enough” is bluegrass reassurance, second track “You Didn’t Call My Name” is genre-defying grace. Molly’s guitar sets a dreamy, roots-pop pace as she sings achingly about missed opportunities. “I wrote the song right before I left California,” she remembers. “I was feeling a lot of things were unfinished there.”

Even as she stuns listeners with her original songs and collects songwriting awards, Molly’s identity as a guitarist and vocalist influences how she writes. “I think my songwriting goes into who I am as a musician,” she explains. “Writing songs inspires different things on guitar, and vice versa.”

Frenetic “Save This Heart” is a perfect example of Molly’s process. “I came up with the guitar part, and then the words and story started falling into place because the guitar had an urgency to it,” she says. “It’s a song that came out of guitar playing first.” The track is a mesmerizing showcase of Molly’s clawhammer guitar mastery. Even when she could easily fall back on the magic of her fingers, she never shortchanges listeners lyrically: “Your letters get shorter, days get longer / I call across the border, it’s static on the line / Save this heart of mine,” vividly captures the panic of realizing you might be too late.

Molly had the melody for “Friend and a Friend” for years before settling on its traveling musician storyline. Reveling in its bluegrass bones, the song builds, growing bigger and stronger like the “friend and a friend” fanbase she’s singing about. Instrumental “Super Moon” exudes the spontaneity of the song’s recording process: Molly and drummer Jano Rix had never played the tune together before, and their virtuosic chemistry is a joy.

“Lightning in a Jar” breathes new life into a familiar metaphor, and Molly says the moving portrait of nostalgia may be her favorite track on the EP. Her haunting vocals steal ears away from her subtly brilliant playing, underscoring just how much of a triple threat she truly is. “I was thinking about when I was a kid, growing up and visiting my grandparents in Illinois,” she says. “It was a totally different environment than California. It was a magical time, and I was just trying to capture it––my childhood memories.” EP closer “Walden” rearranges Thoreau lines and mixes them with Molly’s own to create stunning musical commentary on impermanence. “I was thinking a lot about climate change,” she says. “In California, we are dealing with really big fires, and it’s so sad. I know people whose houses have burned down. I was thinking about how we relate to the planet.”

When asked what she hopes listeners experience listening to Rise, Molly doesn’t hesitate: “I hope it can bring comfort to and move people. I wrote some of these songs to try to bring positivity to tough situations. Really, I just want to bring people joy.”

RACHEL BAIMAN is a fiddle/banjo player, singer, and songwriter based out of Nashville, TN. Specialising in Old Time, Bluegrass, Scottish, and Folk music, her interests are diverse and range from the oldest fiddle traditions to the most innovative of collaborations.

A departure from her stripped-down duo work with 10 String Symphony, her new album “Shame” is lush and varied in instrumentation and musical texture. Inspired in equal parts by John Hartford and Courtney Barnett, Baiman’s influences span a wide range, but years spent playing traditional music on the fiddle shine through in the albums firmly rooted sound, which is at once infectiously familiar and unexpected.

For the recording and production of the album, Baiman turned to the talents of Mandolin Orange’s Andrew Marlin. “I’ve always been in love with the music of the South, and around the time that I was writing a lot of the music for this record, I was listening to all North Carolina made albums– including the album Andrew produced for Josh Oliver (Oliver plays and sings all over
Baiman’s record). Andrew is such an incredible songwriter, and from the moment we started doing pre-production, I felt that he completely understood the feeling of each song. We worked really collaboratively in the studio, and those were some of the most inspiring days I’ve ever spent making music”.
In many ways, “Shame”, the new album from 26-year-old songwriter and instrumentalist Rachel Baiman, is an exploration of growing up female in America. “I wasn’t necessarily trying to write songs that would be easy to listen to”, Baiman says of the project, “I wanted to write about reality, in all of it’s terror and beauty”. From the title track about abortion politics, to love, sex and abuse in relationships, to classism and inequality in her re-write of Andy Irvine’s working class anthem “Never Tire of the Road” the album is ambitious in its scope, yet remains cohesive through Baiman’s personal perspective. Despite the serious subject matter, the overall feeling of the album remains light, with the tongue-in-cheek “Gettin’ Ready to Start (Gettin’ Ready) and feel good “Let them Go To Heaven”. Baiman’s background as a fiddle and banjo player is obvious in the groovy, thought-out, and largely acoustic arrangements.
“If I wanted to rebel against my parents I could have become a finance banker or a corporate lawyer” says Baiman of her childhood. Raised in Chicago by a radical economist and a social worker, Baiman was surrounded by social justice issues her entire life. “Activism runs deep in my family. My brother is a union organizer, my sister is a math teacher at a Title 1 school, and my 87 year old Grandmother still travels the world by herself to attend environmental walks and rallies. She is a true inspiration”
Baiman’s parents were folk music fans, and Rachel grew up playing old time and bluegrass fiddle, traveling around rural Illinois to jam and play at fiddle contests and county fairs. “I had a bit of a double life, on the one hand going to public school on the west side of Chicago, where my friends and I danced to hip-hop and Top 40 R-and-B, and then secretly running off on the weekends to play old-time and bluegrass in the cornfields of the midwest.”
As a teenager, Baiman found music to be a welcome escape from worrying about global politics. “I often found the constant discussion of seemingly unsolvable problems to be intense and overwhelming, and when I moved to Nashville to pursue music it felt like something positive, beautiful and productive that I could put into the world.”
“Now that I’ve had some years to devote to music,”–Baiman has been recording and touring internationally for the past 4 years as part of the progressive bluegrass duo 10 String Symphony, and has played in the bands of numerous other artists including Kacey Musgraves– “I find it hard to escape from the values that I grew up with, and I feel compelled to write politically, to speak out about things that I’ve experienced or seen. I love doing that through songwriting, because it avails a more emotional vehicle for discussion. I love the political tradition of folk music, from Woody Guthrie to Macklemore, and I hope to add another perspective and voice to that tradition.”

“a goose-bump-instigating talent that reminded me of a young Gillian Welch or Joy Williams (Civil Wars).”- Z. N. Lupetin, The Bluegrass Situation