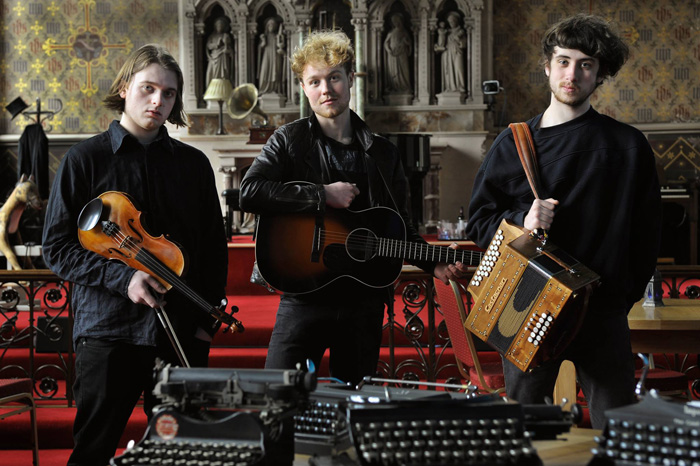 MOORE MOSS RUTTER: Tom Moore, Archie Churchill-Moss and Jack Rutter hail from three distinct regions of the UK – they combine musical material, style and tradition from Norfolk, Somerset and Yorkshire respectively. Since 2009, Moore Moss Rutter have been playing as a trio, meticulously reworking English tunes and compositions into sets and songs which have been described as “intelligently crafted musical adventures”. Often praised for musical “maturity and sophistication”, it is their aim to carefully create soundscapes of mellow and precisely engineered beauty – as well as wild builds of tension and tempestuous climaxes. The trio have performed widely, at venues and events ranging from Glastonbury, to folk clubs and living rooms. Moore Moss Rutter are winners of the BBC Radio 2 Young Folk Award 2011.

Tom Moore has been playing violin since the age of 4, and learnt using the Suzuki Method, an alternative educational philosophy which primarily focuses on teaching the instrument by ear. He studied Music at Goldsmiths, University of London. In addition to Moore Moss Rutter, Tom also performs with violinist/viola d’amore player John Dipper and duet concertina player Nick Hart in Oss; and has done deputy and session playing for a range of prominent artists including Nick Zinner (Yeah Yeah Yeahs), Alex Heffes for BBC films, Robert Mitchell, Bellowhead, Antonio Forcione. He is also part of new folk-rock band, False Lights, which debuts in summer 2014. Tom plays a violin made by Rod Ward.

Archie Churchill-Moss is one of England’s top melodeon players. Having been tutored by Andy Cutting, Rob Harbron, Saul Rose and many others, he is well positioned to carry the baton of virtuosic diatonic accordion tradition. Archie also performs with Breton/Folk/Rock outfit, Dragonsfly, while also studying Biology at Bristol University. Archie plays a Castagnari Mory melodeon.

Jack Rutter is a respected guitarist and multi-instrumentalist working within the English tradition. Self taught, he is known for his for his highly rhythmic tune backing, flatpicking and fingerstyle playing. In addition to his contribution to Moore Moss Rutter, Jack plays in the Seth Lakeman Band, and he is in high demand as a session guitarist for numerous other artists and outfits in the British folk scene and further afield. Jack has just graduated with a degree in Countryside Management from Newcastle University. He plays a custom guitar built by Alister Atkin.