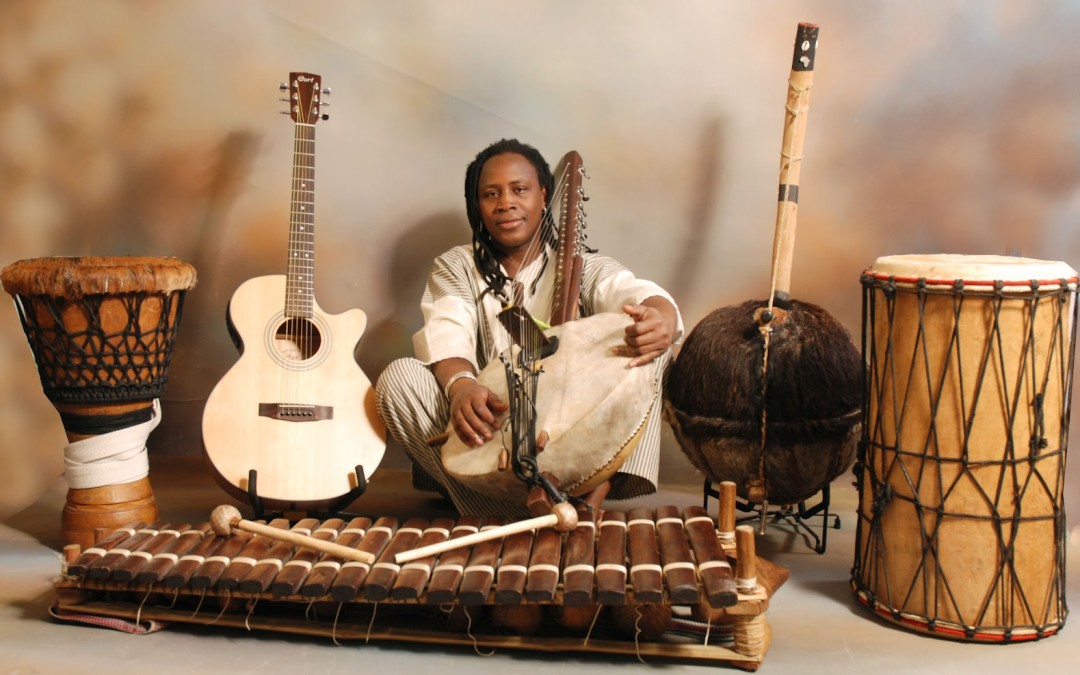 MOSI CONDE is a Green Note favourite and one of the finest musicians on the scene. The range of instruments he plays is astounding. He is well known for his creative and sparkling Kora and lightening force intuitive Djembe. To this solid foundation he adds Bolon Bata – a goatskin covered calabash which in his expert hands more than equals major double bass players, Donso Ngoni (round – bass), Kamelon Ngoni (the griot’s bass), Balafon (as vibrant as any Vibes or Xylophone), Guitar, Gongoma (large calabash thumb piano) and many many traditional percussion instruments. A living contemporary archive! Highly respected, he has been involved in some stunning collaborations including being part of Africa Express In C Mali, the PRSF New Music Bienalle, Coltrane A Love Supreme Re-envisioned, In Place of War …

MOSI CONDE solo or with his band Kaira Kora Afrika creates music that excites and delights, his virtuoso skill evident throughout. “We griots are born in music, every family plays together. Music is our life”. Mosi Conde’s celebration of his griot heritage shines through. His debut album ‘Kaira Kora Afrika’ secured glowing reviews and Radio 3 and BBC World Service airplay Mosi Conde is a great communicator sharing deep awareness of his beloved Guinea and a strong affinity for London through his fabulous compositions and performances. He has played solo at WOMAD and for Nelson Mandela and Bill Clinton, and with his band at the Royal Albert Hall, Royal Festival Hall, and at many major festivals He has a prestigious [email protected] TT Best of British award.

MOSI CONDE is a Djeli Deni – young griot – from Guinea Conakry’s leading family: Sekouba ‘Diamond Fingers’ Diabate & Mory Kante – with whom he recently performed at the RFH alongside Baaba Maal at Africa Utopia – are his uncles, Sona Diabate the founder of Les Amazones de Guineé is his aunt & his family are the inspiration for friends like Salif Keita, Alpha Blondy. Mosi Conde performed with and arranged music for globally renowned relatives Ami Koita and Sekouba Bambino at their London Festival concerts