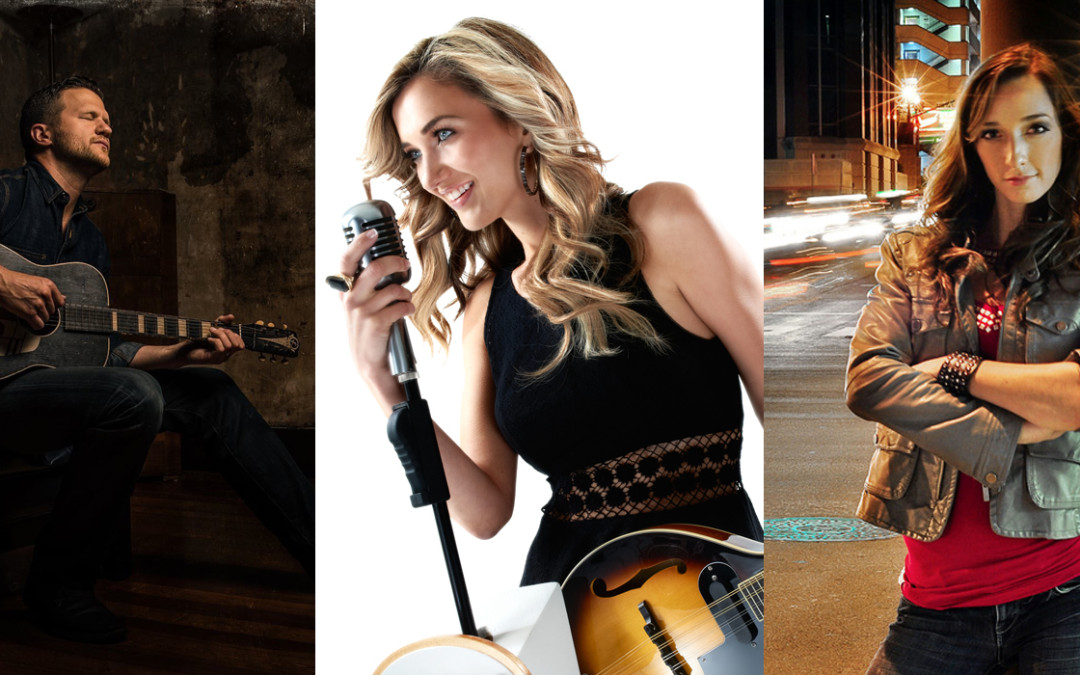 A taste of Nashville returns to the UK in May 2017. Nashville in the Round will comprise three Nashville resident and wonderful performing together and individually whilst supporting each other. An evening in the style of the Nashville’s famous Bluebird Café as Sarah Darling, Jenn Bostic and Michael Logen come together.

Over her career Sarah Darling has released several albums with 1/2 a million downloads worldwide and two number 1 videos on CMT and GAC. Her biggest hit, ‘Home to Me’ lead to performances on Conan O’Brien, Fox & friends, and opening for artists like Carrie Underwood and Kacey Musgraves. The dream of playing the Grand Ole Opry came pass Feb 2011, when Sarah debuted. Her next Grand Ole Opry appearance will mark her 82nd performance on the historic stage. Darling is getting ready to release new music this spring. She recently supported chart topping duo Ward Thomas on their UK tour.

Jenn Bostic is a Minnesota native, currently residing in Nashville, Tennessee. Her emotive songwriting and powerful vocals have been touching hearts around the world. “Jealous of the Angels,” a song written for her late father, allowed her to connect and empathize with her fans in a remarkable way. “Jealous of the Angels,” produced by Barrett Yeretsian was discovered by

Smooth Radio’s Simon Bates, where the song immediately jumped into the station’s Top 10 Most Played. The song was soon playlisted on BBC Radio 2, and after a live performance on BBC Breakfast it went #1 in the UK. In 2012, Bostic received 5 Independent Country Music Association Awards

including “Best Female Artist,” and “Best Songwriter.” She has performed across the US, as well as the UK and Germany, including venues such as The Grand Ole Opry, The Ryman Auditorium, and Jazz at Lincoln Center. She has opened for artists such as The Band Perry, Eric Paslay, Randy

Travis and Christian Kane. June 1, 2015, Bostic released her third album “Faithful.” Debuting on popular UK television programme Songs of Praise, with a release concert in London, a one month tour of Germany, and full band tour in the United States, “Faithful” has already begun impacting people around the world.

Michael Logen was raised on America’s hard-luck song-canon of folk and traditional country, heartfelt and authentic music. Growing up in a Mennonite home in the beautiful, historic town of Lewisburg, Pennsylvania, he learned to play guitar, piano and harmonica during informal living-room jam sessions with friends and family.  He cut his musical teeth on the songs his Dad loved:  Simon and Garfunkel, Tom Paxton, Gordon Lightfoot as well as Merle Haggard, Willie Nelson and Johnny Cash.
Michael’s songs have been recorded by, and often co-written with, many other artists including Kelly Clarkson, Mat Kearney, Jonny Lang, Brandon Heath, The Greencards, Paul Carrack, Will Hoge and Sister Hazel, to name but a few. His songs have also been featured on several TV shows including Nashville (ABC) and, Parenthood (NBC). Michael has performed throughout North America as well as Ireland, England, The Netherlands, Germany, France, Spain and Italy, opening for such artists as John Hiatt, Sarah Jarosz, John Legend, India.Arie, Jonny Lang and Mat Kearney.