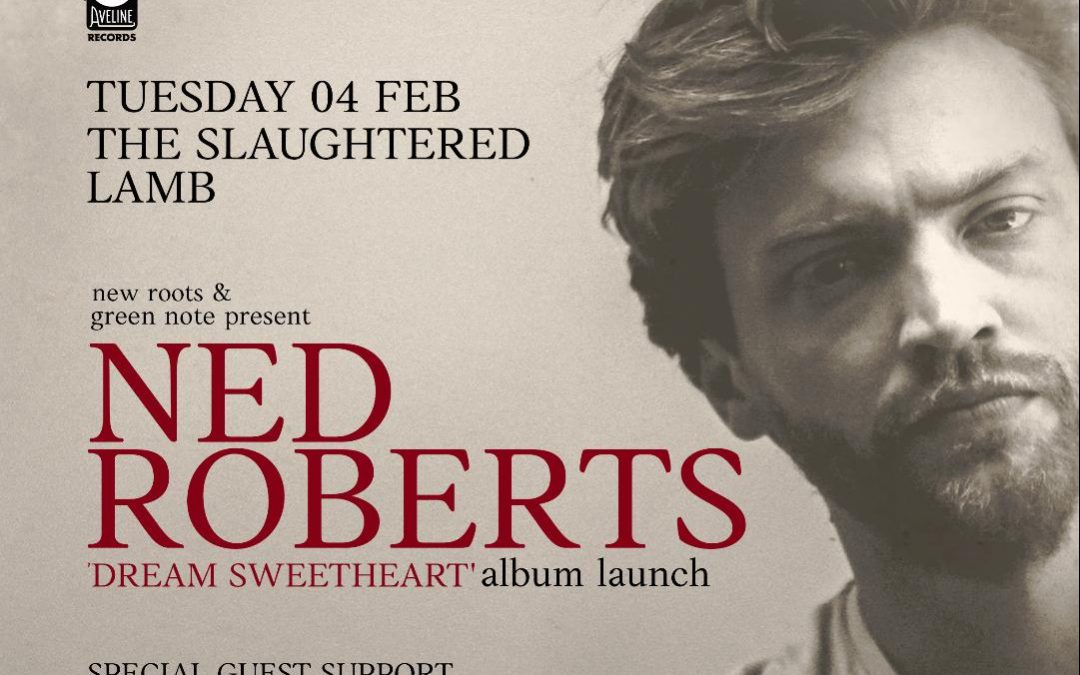 ** PLEASE NOTE: This show has been postponed from its original date of 21st Oct ’19 to 4th Feb ’20.   The show will take place at our alternative home for the evening: THE SLAUGHTERED LAMB, 34-35 Great Sutton Street, Clerkenwell, London EC1V 0DX. Doors open 7.30pm. Music starts 8pm. **

Green Note and New Roots present… Ned Roberts – Album Launch… Featuring Special Guest Michele Stodart. DREAM SWEETHEART is NED ROBERTS’ third album, and his third with producer Luther Russell (Richmond Fontaine, Fabiano do Nascimento, Sarabeth Tucek), recorded in Los Angeles in Electrosound Studios. His eponymous debut was a predominantly solo affair, and garnered significant national press, notably in UNCUT and The Guardian. The second, Outside My Mind, added an Americana expanse to the folk foundations of his debut, cutting live to tape to create a warm, spacious sound. It was released to wide acclaim on Aveline Records in 2017 (Ani Difranco, Ruth Theodore), and played across BBC 6Music and BBC Radio Scotland. DREAM SWEETHEART builds further on this creative dynamic. With ten days in the studio, and working from simple acoustic demos, the ethos of the record was one of invention and spontaneity. The copper pan loops on Slower than the Sea, the train/rain soundtrack to Stay A Little Longer, the late night recording of cicadas that accompanies Miles Between – these are just a sample of the soundscapes that resulted from staying open and alive to the possibilities each song suggested, whilst keeping Ned’s voice front and centre. Ned has toured widely around the UK. He attained a much sought after support tour with celebrated US songwriter Anais Mitchell, and has also supported the likes of Joe Pug, Micah P. Hinson, The Delines, Sam Morrow, and The Stray Birds. He has toured the West Coast of the US, and recently embarked on a 10 date tour of Germany, as well as gigs in France, Spain and Italy. DREAM SWEETHEART will be released on October 21st on Aveline Records, with a UK tour in November.