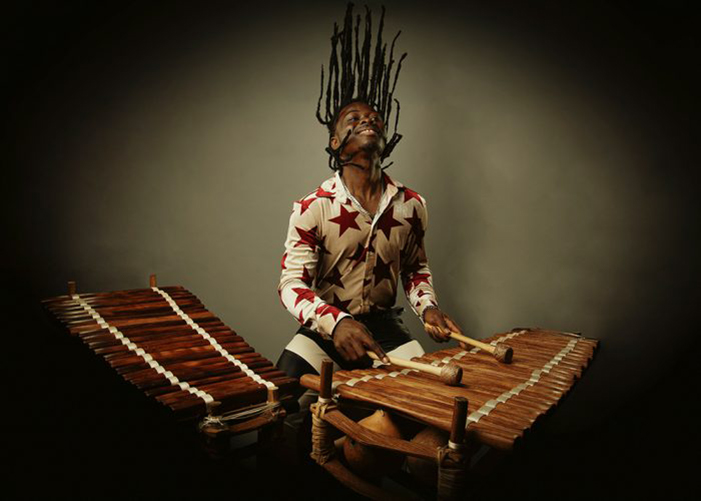 N’famady Kouyaté is a young energetic master musician from Guinea (Conakry), who relocated to Cardiff (Wales) in 2019. A talented multi-instrumentalist who wowed audiences across the UK and Ireland during autumn/winter 2019/20 with his modern interpretations of traditional West African Mandingue songs and rhythms supporting Gruff Rhys on the Pang! album tour. N’famady’s primary instrument is the balafon – the traditional wooden xylophone, sacred to West African culture and his family heritage of the griot/djeli. In Guinea he founded ‘Les Héritiers du Mandingue’ a tradi-modern group that toured extensively in West Africa.

In the UK N’famady has played both as a solo artist and with a full band line up – where his arrangements are a fusion of Mandingue African with western jazz, pop, indie, and funk influences provided by an ever-evolving collective of musicians. Instrumentation includes balafon, keyboards, drumkit, djembe, guitar, bass, kora, doundoun, congas, saxophone, trumpet, & callabash. N’famady’s performances create amazing atmospheres and vibrations wherever he goes, and audiences are charmed by his infectious enthusiasm and joy.

N’famady released his first EP in July 2021, recorded in the legendary Rockfield Studios, with a full band line up, including guest appearances from Gruff Rhys (Super Furry Animals), Lisa Jên Brown (9Bach), and Kliph Scurlock (The Flaming Lips). The EP features mash-ups of traditional Guinean songs with new Welsh lyrics, modern & traditional instrumentation, played by a ten-piece band. N’famady has a steadily growing fanbase both in the UK and West Africa.

During the 2020 lockdown N’famady participated in a number of online events including DarloDrum Fest, Ara Deg festival online, Out Of Focus Wales, and Gwyl 2021 festival – but due to COVID-19 restrictions was only able to do solo sets. N’famady did play one pop up (socially distanced) gig with a full band line up, plus special guest Gruff Rhys, as part of Butetown Carnival in Cardiff Bay in September 2020. The Summer of 2021 however saw the band performing at the Wales Millennium Centre, Llangollen Fringe Festival, and taking Green Man Festival by storm headlining the Chai Wallah stage.

“N’famady Kouyate is one of the most exciting and skilled musicians that we have in Wales today. Following on from his significant contributions performing on the critically acclaimed Gruff Rhys album PANG!, it’s no surprise to us that N’famady is now gaining good career momentum in his own right, as a solo artist. We’re delighted to have N’famady showcasing at FOCUS Wales 2021 in October, and I didn’t hesitate to select N’famady as one of just 5 INES artists from Wales selected for our FOCUS Wales INES roster 2021-2022, as N’famady is well placed, with the right support, to take big steps in his career over the next year.”Andy Jones, Co-Founder & Music Programmer, FOCUS Wales (09/03/21

“…a kaleidoscope of vibrant sounds and colours, a mesmerizing and joyous introduction to a truly international artist” Bill Cummings, God is in the TV