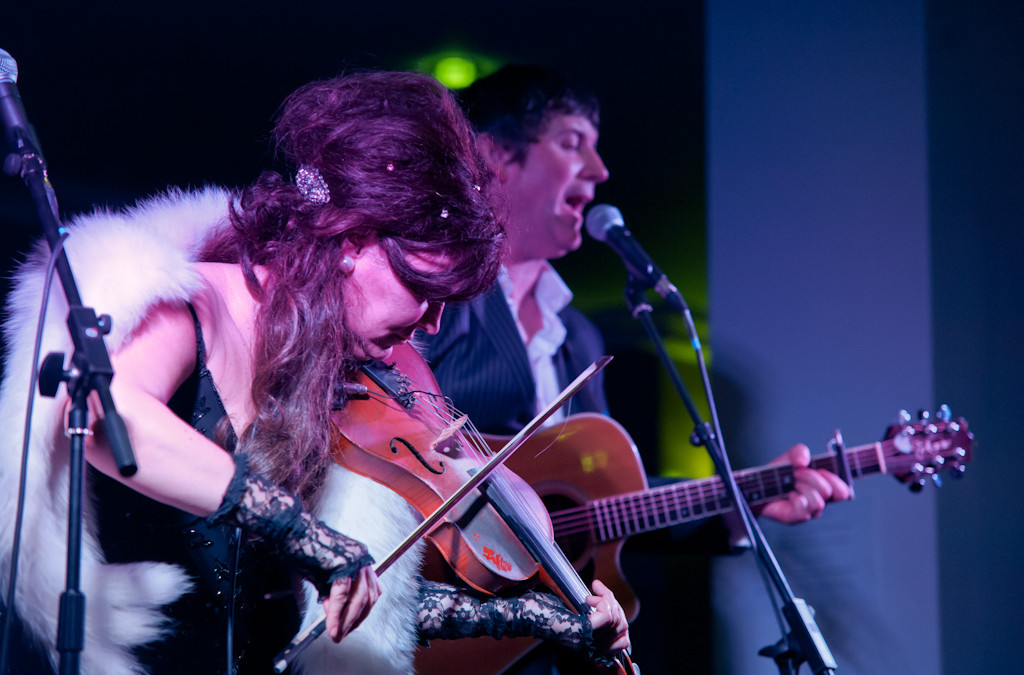 Noreen has played fiddle since the age of eight, growing up in Birmingham surrounded by many traditional musicians including her own fiddle-playing father, Jack Cullen. She won several all-Ireland titles as a schoolgirl and moved to London in the early eighties to join the London-Irish band Stirabout, a band that would produce future members of the Pogues, the Popes and Afro-Celt Sound System.

She went on to perform in both Riverdance and Lord of the Dance, in a West End production by the Chicken Shed Theatre Group, and is regularly in demand as a session player for both recordings and live performance.

Adrian Burns is a singer/guitarist and songwriter who met Noreen in Birmingham in 1985. He grew up playing traditional Irish music on flute, bouzouki and guitar and has been a regular contributor to sessions and gigs in Britain and Ireland since his teens.

They have performed over 2000 gigs together including appearances on BBC1, Channel 4, RTE, and BBC London Radio. They have played Sydney Opera House with the Australian Philharmonic Orchestra, completed a 3-month stint at the Barbican with the Royal Shakespeare Company and have toured with the Irish Folk-Ballet Company in places such as Scandinavia, Bahrain and even Agia Napa!

They have recently performed several gigs with Birmingham-based accordion player Tommy Diegnan. Tommy has played Irish button accordion since he was a young boy, and has passed the love of Irish music on to his 2 young sons. Adrian, Noreen and Tommy performed together most recently in Birmingham as part of a new band ominously called ‘The Headers’, with Green Note regular, banjo player Brian Kelly, Manchester born singer / whistle player Grace Kelly and the piano accordionist extraordinaire Karen Tweed. The concert was well received and is likely to be repeated soon. In the meantime we have a scaled-down version of The Headers at the Green Note and, as the name suggests, anything is possible!

Conor Healy, Colm McGonigle and Hannah Donelon
Conor Healy is a flute player who grew up in Birmingham’s vibrant Irish music scene. Now based in London, he is co-founder and director of The Trip to Birmingham Tradfest, an annual festival which takes place in late November. Conor met Belfast-born concertina and harp player Colm McGonigle while living in Cambridge. The two have performed together at concerts and festivals across the UK, Ireland and Europe. Singer Hannah Donelon has performed extensively both as a solo artist and in bands. She is a member of both the Manchester band Shake The Barley and London-based Southfleet, whose first EP will soon be released.