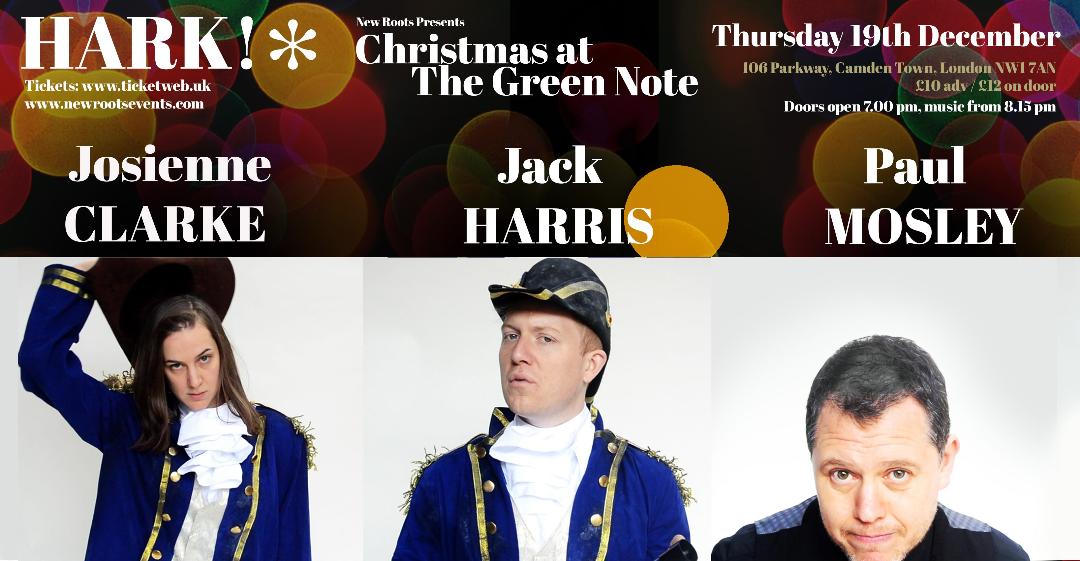 New Roots presents… a cornucopia of Yuletide revelries and a feast of festive celebrations with JACK HARRIS and PAUL MOSLEY plus very special guest JOSIENNE CLARKE!

Expect collaborations and Christmas songs alongside the artist’s own formidable repertoires.

Jack Harris’s songs take a compassionate look at things both common and uncommon, and see them differently. They are literate, curious, often in character, and always intriguing. His latest album, ‘The Wide Afternoon’, produced by UK folk giant Gerry Diver (Sam Lee, Lisa Knapp, Tom Robinson), was released in November 2016 to universal press acclaim. Jack was a SXSW showcasing artist at 17, and the youngest ever winner of the Kerrville Folk Festival’s New Folk Award in 2005 (previous winners include Gillian Welch, Devon Sproule and Anais Mitchell). He has been the recipient of the PRS ATOM award for new music creation, as well as an EFDSS creative bursary for songwriting.

‘Jack Harris is a priest of song who holds himself to a rigorous, ancient code of beauty most of us have forgotten exists.’ Anais Mitchell

Singer/songwriter and theatre composer Paul Mosley’s musical adventures have taken in an Icelandic farmers choir, horror soundtracks, a suite based on bird song and music inspired by kids TV classic ‘The Clangers’ as well as tours with Shane MacGowan, Jamie Lawson, Eddi Reader and Neko Case. His last project ‘The Butcher’ an epic folk opera introduced him to a new crowd of young folk musicians and fans with The Quietus calling it ‘A darkened folk masterpiece’ and Folk Radio UK and Resonance.fm both making it an album of the year.

a cornucopia of Yuletide revelries and a feast of festive celebrations with Jack Harris and Paul Mosley (plus a very special guest addition to be announced soon!). Expect collaborations and Christmas songs alongside the artist’s own formidable repertoires.

When Josienne Clarke signed to the illustrious independent music champions Rough Trade Records, its founder Geoff Travis told The Guardian that she writes, ‘songs that rearrange your internal emotional landscape… reinventing the popular song structure’. With a rare gift for poetic melancholy, Josienne’s songs have also been described as ‘extraordinary’ (Mojo), ‘gently exquisite’ (The Observer) and ‘full of depth’ (The Telegraph). American Songwriter magazine named Josienne one of the best songwriters of 2016.
In the last two years, Josienne has supported the great Richard Thompson and opened for the legendary Robert Plant in Europe. The summer of 2018 saw her perform with guitarist Ben Walker at some of the UK’s best-loved festivals, including Latitude, Larmer Tree and End Of The Road. She even found herself in demand as a writer and broadcaster, contributing to Standard Issue magazine and appearing on BBC Radio 3’s The Verb to discuss her pet subject melancholy, alongside poet Simon Armitage.