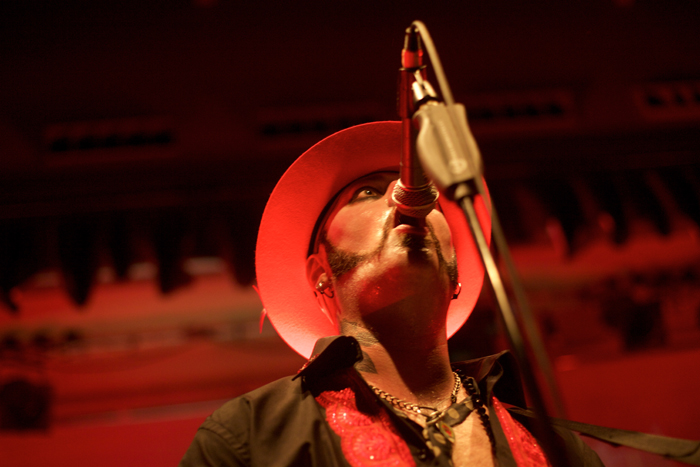 Mr Angel has since 2003 been the front man, songwriter and band leader of London’s The Urban Voodoo Machine. They have toured the world and released 4 critically acclaimed and award winning albums with their dark and infectious music they call ‘Bourbon Soaked Gypsy Blues Bop’N’Stroll’. Tonight he steps up to the mike alone without his usual 8 piece band armed only with an acoustic guitar, the devil’s songbook, some blues harps and a kazoo!

“If you get the chance to catch Paul-Ronney Angel solo take it, it’s different to a night out with The Urban Voodoo Machine but it lets you see what drives that beast forward.” Uber Rock

Support from Michael J Sheehy: To use the English vernacular, by his own account Michael has pissed away two or three careers. Alcoholism and his determination to never compromise put paid to his first band – 90s cult rockers Dream City Film Club who released two albums and a handful of EPs on the Beggars Banquet label. The label kept faith with him and released three critically acclaimed but commercially disastrous solo albums before finally dropping him in 2002. He briefly reappeared again in 2007 releasing two albums on the Glitterhouse label.
In 2011 Michael was lucky to escape a fire at his London apartment which gave him the much needed impetus to finally quit drinking. Since then he has been sober, gotten married and become a father. He has continued making music as part of the rock band Miraculous Mule and as one half of psychedelic electronic duo United Sounds of Joy. He is currently working on material for what will be his first solo album in 10 years.