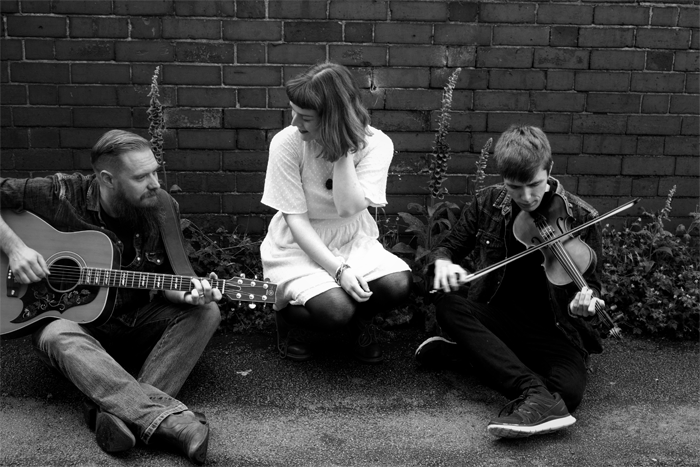 PISTOL PETE & THE WILDWOOD FLOWERS: The wildwood flower – sweet but rough-hewn, beautiful and homely – gave country music royalty the Carter Family their biggest hit, and the English county town of Stafford the name of one of its leafiest districts. Fusing Appalachia with home-grown folk, then, is what Pistol Pete Wearn and the Wildwood Flowers were named to do.
After two solo albums and five years of touring with just his guitar and a stompbox for company, Moonshine Magazine’s Solo Blues Artist of the Year Pistol Pete Wearn has resolved to travel some country roads. Meeting like-minded rail-riders at open mics and community music workshops, he has built a trio that fits its storied moniker precisely.
A new project for Wearn, the trio showcases a gentler, more thoughtful side of his songwriting, which has been featured on BBC 6 Music and gathered numerous accolades (“music as true as it gets” – Blues Blast Magazine). With a sound filled out by fellow Staffordians Olly Parry on fiddle and BBC Introducing favourite Helena Francesca on backing vocals and autoharp, Wearn’s latest material draws on folkier roots to reflect on the wider world.
“Coming off of my 2018 European tour, a new project in which I could express some more personal feelings and thoughts away from the rawer, bluesier sound I’d been playing made a lot of sense,” remarked Wearn.
Pistol Pete Wearn and the Wildwood Flowers is released in September 2019, and the band will be touring to support the record.