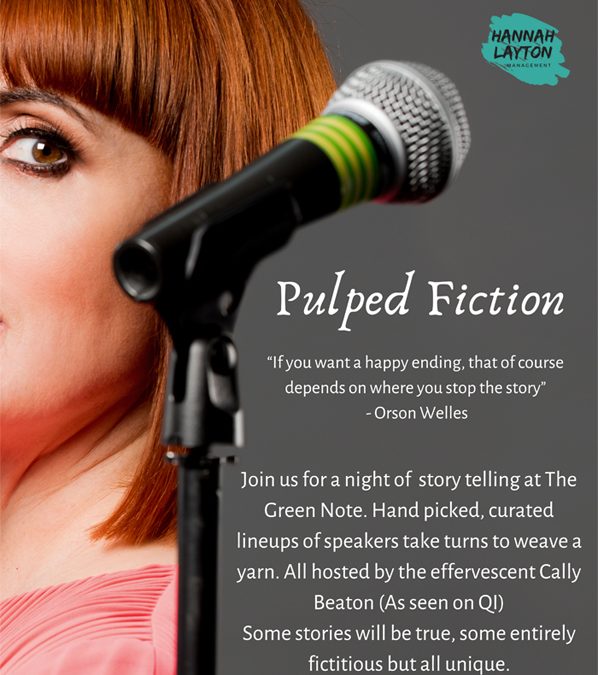 “If you want a happy ending, that of course depends on where you stop the story” Orson Welles

Join us for a night of spoken wonder at Green Note. A hand picked curated lineup of speakers take turns to weave a yarn. Hosted by the effervescent Cally Beaton (As seen on QI) some stories will be true, some entirely fictitious but all unique.

Sarah Bennetto: “Sarah Bennetto is a storyteller par excellence” – Time Out, London
“Bennetto delivers effervescent, confident and well-structured stand-up. Her tales of outrageous fortune are suffused with urbanity and wisdom, and buoyed by a lightly-rendered sense of nostalgia.”★★★★– The Age, Melbourne
“Sarah Bennetto is a winner. Holidays, cash, a car, concert tickets, and now she can add a corker of a comedy festival show to her list.”– Australian Comedy Review
“The undeniable star of the show is the scintillating storyteller, Sarah Bennetto. Her stories and anecdotes are particularly funny.”★★★★– Broadway Baby

Michael Wheeler: Michael wheeler is a writer and performer from Southend-On-Sea. He is one of the winners of the 2019 BAFTA Rocliffe TV Comedy award, and writes, directs and performs in comedy shorts for his YouTube channel Beloved Aunt Comedy.

Howard Cohen: Howard has written for TV programmes on ITV2, BBC3 and Channel 4. As a producer he has worked for major production companies including Warner Brothers, Disney, Objective Productions and Lion Television. He has written and produced highly successful a series of scripted comedy films for Yahoo!, and the number one most viewed series of shorts for Channel 4 online. Working in development he has had comedy projects commissioned for most of the major broadcasters including Channel 4, BBC, ITV, and Sky.
His first scripted comedy has been optioned by a major production company, whilst his second scripted project is currently in development at another company.

Martha Pailing: Martha is a northern born spoken word and performance artist with a background in theatre and live art. Her works blend autobiographical material with absurd fantasy, using the small and seemingly insignificant moments to celebrate human messiness.
Martha has performed at the Royal Court, Essex Book Festival, a lot of sticky pubs and recently finished a year-long residency at the Roundhouse.

Your host is Cally Beaton: Cally is a comedian, writer, speaker and business mentor she’s a natural storyteller full of intelligent, distinctive and punchline-rich material and her star is fast on the rise. She has held senior management positions at some of the biggest media companies in the world including MTV, UKTV and Viacom. Early in her career she headed an independent television production company that was bought by ITV’s Carlton Television (where a certain David Cameron was on the board). She left to set up a successful creative consultancy company, and went on to do a 10 year stint as Senior Vice President at the US studio giant Viacom. There, Cally oversaw a multi-million dollar budget for channels including Nickelodeon, MTV, Comedy Central and Paramount; if you want someone to blame for bringing South Park and SpongeBob SquarePants to the world, you need look no further. She has a Masters in Neuro Linguistic Programming and has worked for many years, alongside her not inconsiderable day jobs, as a sought-after Executive Coach to the great and the good in industry, public life and politics.