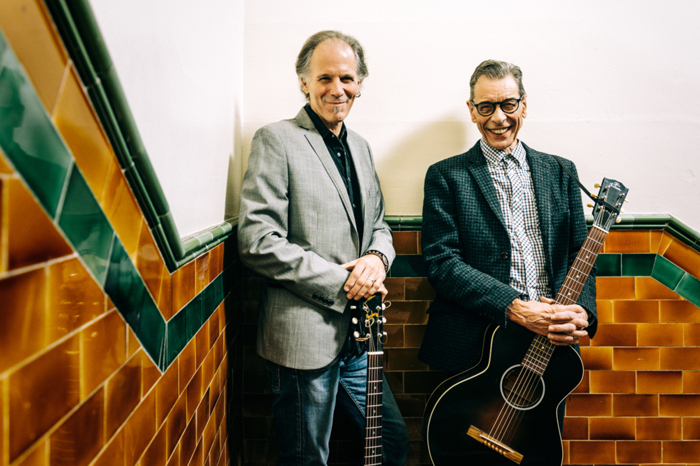 RAB NOAKES & BROOKS WILLIAMS: The Rab Noakes/Brooks Williams Scotland-USA Trans-Atlantic collaboration was inevitable. Fuelled by a shared passion for acoustic roots rock, hook-laden songwriter pop, and folky Americana, they met in Glasgow in 2018 when Rab sang backing vocals on Brooks’ ‘Lucky Star’ recording. Shortly thereafter they got together to write songs and the plan to perform was hatched.

But it goes back further than that. In fact, it goes back nearly 30 years. At the very beginning of Williams’ career, he began or ended every show with a song called ‘Going Back To Dublin’. A Rab Noakes song, as it turns out, that Williams learned from a cassette a friend brought back to America from a Scottish holiday.

Born in Statesboro, Georgia, Brooks Williams got his start in the small bars and coffeehouses of New York and Boston. That was 28 albums ago. A rootsy songwriter, Williams is ranked in the ‘Top 100 Acoustic Guitarists’ and his voice is one “you just melt into” says AmericanaUK. He’s collaborated with the likes of Hans Theessink, Boo Hewerdine, Sally Barker, Chris Difford, Dave Kelly & Paul Jones.

Rab Noakes is a force to be reckoned with in the world of music. A Scottish singer-songwriter from Fife, after more than 50 years and 20 albums, he is a songwriter, producer, guitarist, and singer of the highest order. Collaborations and affiliations include Lindisfarne, Barbara Dickson, Rod Clements, Stealer’s Wheel, Gerry Rafferty, the Varaflames, Michael Marra, and Celtic Connections, to name but a few.

Rab’s songs reflect his lifelong interest in ‘popular songs’ and ‘roots songs,’ combining melodic hooks and Americana-styled narratives. His interpretations are inspired and feature songs from sources as diverse as Elizabeth Cotten and Beck. In addition to his songs, singing, and collaborations, his professional experience also includes radio production for the BBC and The Musicians’ Union, where Rab is on the Executive Committee. In recent years he received the prestigious ‘Tartan Clef’ award and was inducted into the ‘Hands Up For Trad’ Hall of Fame.