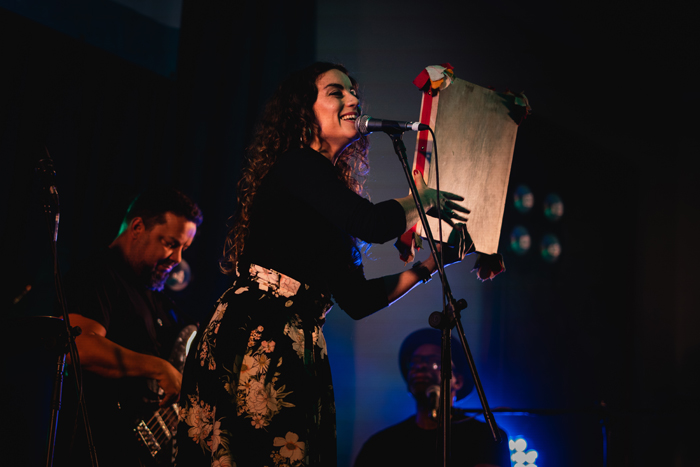 Vibrating with African, Brazilian and Portuguese grooves, Radio Kriola Ensemble is a spicy blend of renowned musicians gathered around Catarina dos Santos original music, and other repertoire of the African Diaspora in Lisbon. Catarina dos Santos (Portugal) and Tello Morgado (Angola), bring the Iberian Peninsula and Angola in their blood, and Lúcio Vieira (guitar/keys) together with Luciano Vasconcelos (bass), are the groove masters, their playing imbued of their Cape Verdean and Brazilian traditions. Radio Kriola smiles in the cusp of Southern Europe and Africa, dancing its grooves like no other, mirroring Lisbon’s mix of Europe, Brazil, Africa and the Mediterranean.
Reviews:
“Colorful WorldPop…Wonderfully airy, summery and light, full of rhythm and with a constant vocal smile.” 4 ☆☆☆☆ – Westzeit – Pop auf Draht
“The colors and rhythms of Brazil, Cape Verde, Angola and the Portuguese fado not only seem to find each other effortlessly, they also enrich each other, they become more beautiful. Rádio Kriola is an album that makes you happy and happy. World fusion at its best.” Moors Magazine, The Netherlands
“In Radio Kriola it all comes together. Dos Santos navigates across this vast geography with incredible ease, pointing out the common basis that is clearly shared by all these genres… a poignant and gorgeous melting pot.” Gonçalo Frota, Songlines, UK